Davutoğlu recalls wife's travails due to ban on headscarves 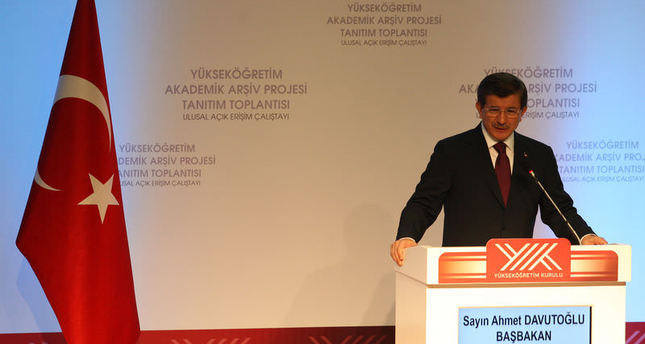 by Daily Sabah Oct 20, 2014 12:00 am
Turkish Prime Minister Ahmet Davutoğlu, referring to the harsh restrictions on religious life following the post-modern coup of Feb. 28, 1997 in Turkey, has said, he, using his academic title, had to wait at the door of the room where his wife was sitting her specialty exam to prevent any insult she might have faced.

Davutoğlu, speaking at a conference at the Higher Education Board (YÖK), touched upon numerous issues regarding education in Turkey. Underlining there had been significant progress over its democratization, Davutoğlu said there were times when students had to face serious restrictions due to their religious beliefs during a specific period in Turkish history when the military forced out a democratically chosen religious and conservative party in a post-modern coup and imposed several bans.

The pressure put on the public's conservative circles began after a coalition government led by the Welfare Party (RP) was forced to resign by the military on Feb. 28, 1997, on the grounds that the RP was promoting religious fundamentalism. The coup introduced numerous harsh restrictions on people's religious life, with a ban on the use of the Islamic headscarf in universities taking the lead.

"I, as an academic, had to wait at the door of the room in which my wife was sitting her specialty exam in case she faced insults [for wearing a headscarf]." Davutoğlu said, expressing discontent over how democracy was crippled by the military intervention that took place in 1997.
At the National Security Council (MGK) meeting on Feb. 28, 1997, the generals submitted their views on issues regarding secularism and political Islam in Turkey to the government. The MGK made several decisions during this meeting, and Prime Minister Necmettin Erbakan from the RP was forced to sign the decisions, some of which were closing many religious schools opened during his term and abolishing sectarian groups.

Massive distress awaited the public's religious circles and those who suffered most were the students who had to struggle with an unofficial but widely practiced ban during this period on the use of headscarves at universities. Considering religion as a threat on secularism, the leftist groups who sided with the ban did not refrain from hurling insults at students wearing headscarves.

The prejudice against headscarved students dates back to the 1960s but the most heated debates on the issue took place toward the end of the 1990s with the military intervention. The current ruling party finally put an end to the debate and after 12 years in power abided by its promise to its supporters passing a law that permitted women who wear the headscarf to work in state institutions as part of efforts by the government to invigorate democracy. Until the ban was removed, the headscarf was stigmatized as backwardness as well as an impediment to secularism and modernity.

"We went through such hard times," Davutoğlu said and further added, "I was an academic then. I witnessed how top students had to face psychological torture before they were admitted to an exam just because they were wearing headscarves."

While women who wear the headscarf currently enjoy the return of their rights of faith in accordance with the removal of the ban, the headscarf as a social problem remains unsolved. The lives of women wearing the headscarf who intended to have a proper education and work in intellectual and high-level positions face social obstructions despite laws that liberate them, allowing them to wear a headscarf, as they still cope with the longstanding "othering" they have faced for decades.

"We have to leave them all behind. We have to shoulder the responsibility for bringing democracy to universities where any ideas are freely discussed," Davutoğlu said.

He underlined that universities should not be a place for propaganda and instead should be places where anyone without being exposed to any kind of discrimination can express his or her ideas.