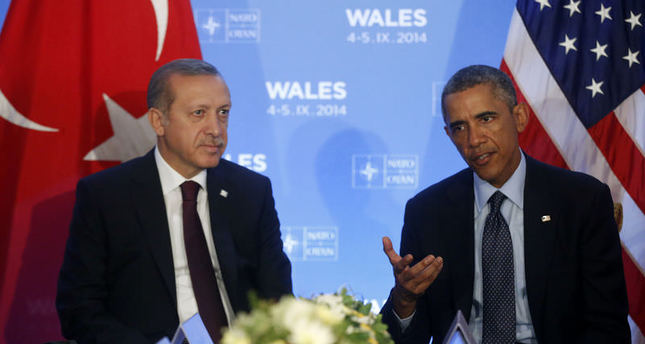 by Daily Sabah Oct 20, 2014 12:00 am
During a telephone conversation on Sunday, Turkish President Recep Tayyip Erdoğan discussed regional issues with his American counterpart Barack Obama, and the two leaders agreed to strengthen the joint struggle against the Islamic State of Iraq and al-Sham (ISIS), a statement released by the Turkish Presidency said. While Turkey echoed its demands that a no-fly zone and safe zone are a must for it to join a military campaign against ISIS, the two leaders discussed ISIS advances in Iraq and Syria and how it could be stopped. The Turkish leader stressed his NATO member country is hosting over 1.5 million Syrian refugees, 180,000 of whom entered the country when ISIS militants attacked the Kurdish populated Syrian town of Kobani in September. While returning from his official trip to Afghanistan on Saturday, President Erdoğan spoke to journalists on the plane; he rejected calls for Turkey to arm the Democratic Union Party (PYD) – PKK's Syria wing – in Syria, describing the group as a terrorist organization.

"There has been talk of arming the PYD to form a front here against ISIS. For us, the PYD is the same as the PKK, it's a terrorist organization," Erdoğan said. "It would be very, very wrong to expect us to openly say 'yes' to our NATO ally America to give this kind of support. To expect something like this from us is impossible," he said.

As Ankara and anti-ISIS coalition officials hold talks on an action plan against ISIS, the U.S. has pushed its demands to access the İncirlik base, but Ankara has listed its demands of a no-fly zone and safe zone to let the coalition use Turkish bases.

Commenting on the use of İncirlik, Erdoğan said the U.S. is not clear on how it wants to use the base, located in southern Turkey. He added that once the U.S. puts its request down on the table, Turkish officials would discuss whether such a demand is acceptable or not. "If it's not a convenient demand, it won't be possible for us to say 'yes,' " he added.

According to the Turkish government, the establishment of a no-fly zone is a must to halt attacks by the regime of Syrian President Bashar Assad on Syrian opposition forces that Ankara and Washington agreed to train and equip in addition to a safe zone along the Turkey-Syrian border for refugees fleeing ISIS attacks in Syria.

Turkey has repeatedly said the fight against ISIS requires a comprehensive strategy, and it has demanded the removal of the Assad regime in Syria that, according to Ankara, is part of a comprehensive solution needed to defeat ISIS.

Efforts to destroy the threat posed by ISIS is not enough, said Erdoğan last week, adding that the Assad regime annihilating towns like Kobani every day should also be targeted. Erdoğan also said that Turkey would continue the fight against ISIS but was careful not to fall into traps and had demands from the U.S., including a no-fly zone and a safe zone.

"Syria has many Kobanis. What will happen to Aleppo, Latakia, Turkmens and other people after saving Kobani? The Assad regime should be the target for a real solution in Syria," Erdoğan said, noting that the regime is responsible for the killing of 250,000 people in Syria. "A no-fly zone and a safe zone should be built so we can be able to place the Syrians inside our country in these safe havens," he said.

"Also, the moderates should be trained and equipped either in Turkey or inside those safe zones so they can be able to conduct their war against the regime."