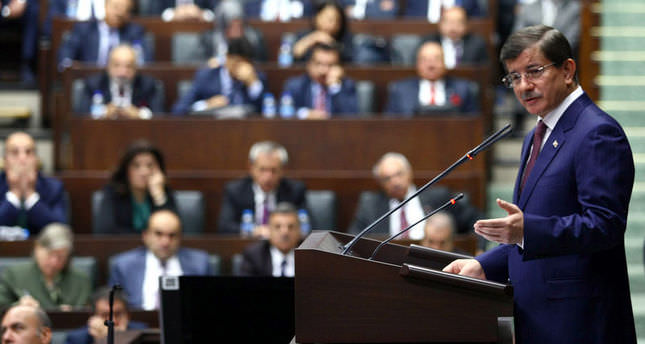 Domestic security reforms contemplated by the government will prioritize people rather than the state, says President Erdoğan, adding that Turkey will now enjoy Western standards in security

Ankara is seeking to improve individuals' lives with a domestic security reform package that aims to establish a balance between freedom and security of the people while enhancing the civilian identity of the Turkish state. Outlined by Prime Minister Ahmet Davutoğlu on Tuesday, the reform package includes life-influencing amendments on security such as Molotov cocktails being considered weapons, prohibiting protesting with face coverings, and treating sellers of the synthetic drug Bonzai as terrorists.

Describing the package as a necessity for the system to prioritize the people rather than the state, President Recep Tayyip Erdoğan yesterday said at the International Ombudsman Symposium in Ankara that there could be no freedom in a country that lacks security. Highlighting the significance of responding to citizens' needs, the president expressed that a state that sees its citizens' demands as a threat will eventually turn into an oppressive state. Pursuing a goal of reaching Western standards in domestic security, the reform package is to resemble measures in the EU and U.S. regarding vandalism, according to Erdoğan.

Portraying the people's security as a contingency of freedom and democracy, Erdoğan said Turkey takes the most appropriate measures to establish security for its citizens not to return to the country of the 1990s when fierce security measures were applied.

The reform package came after the country witnessed violent demonstrations in support of Kobani, which claimed dozens of lives across the country, especially in southeastern and eastern cities where pro-PKK demonstrators accused the government of not helping the people of Kobani in the fight between Kurdish forces and Islamic State of Iraq and al-Sham (ISIS) militants. Scores of vehicles, state buildings, party offices and businesses were set ablaze or damaged during the violent protests.

"We do not invest the police and army with power that may violate an individual's rights and will never overlook police who cross the lines of authority," Erdoğan said, underlining that protecting individuals' rights is of utmost importance in the reform package.

He said that historic steps had been taken for the sake of democratization over the course of the last 12 years. Bringing up the reforms during his time as prime minister, Erdoğan said that the Ombudsman Institution was established and the Constitutional Court's right to hear individual appeals was enacted in 2010.

Speaking at the Justice and Development Party (AK Party) weekly group meeting on Tuesday, Davutoğlu underscored that the Interior Ministry needs to be restructured.

Davutoğlu touched upon the importance for the state to ensure democracy and the future of the state in a transparent manner through the mentioned reforms.

After a series of evaluations conducted by the Interior Ministry, the government came to the conclusion that the state should change its attitude and express its confidence in the people, according to Davutoğlu, who said that citizens will not be obliged to go to civil registry offices during births and divorces. Instead, they will be able to easily report these occurrences through notification. Likewise, citizens will not be required to obtain the court's permission to change their first or last names.

In efforts to provide citizens with a practical and speedy system, the domestic security reform package will allow them to obtain important official documents such as residency and birth certificates through the online e-state system. Similarly, passport and driver's license certificates will be issued by the Directorate of Population and Citizenship Affairs instead of the General Directorate of Security.

Important reforms in the General Directorate of Security are also on the agenda to improve the efficiency and flexibility of the institution, according to Davutoğlu, who said that there is an evident breakdown in the institution that needs to be addressed. He elaborated by saying that the shortcomings will be addressed in an appropriate manner and security officials will be directed to act under the rule of law and adopt security norms.

The Gendarmerie and Coast Guard Command appointments will be made by the Interior Ministry and Davutoğlu said that civilian and democratic inspections of institutions will take place and the government will continue to provide assistance to ensure optimum competency. Moreover, gendarmerie forces will now wear a special uniform designated by the Interior Ministry that will combine elements of civilian aspects and societal appearance of officials. "In this sense, we emphasized structural precautions before others," Davutoğlu said, adding that the government determines what needs to be done and takes steps with the principles of basic human rights.

Intelligence activities will also be inspected to ensure that they are conducted in accordance with the law. For instance, authorization pertaining to technical tracking and wiretapping will be inspected by the Prime Ministry Inspection Board and a report will be presented to the Parliamentary Commission with 17 members.

Davutoğlu highlighted that the right to meet and protest are democratic rights that must be conducted in accordance to laws and regulations pertaining to public order. He said that creating violence and riots through such means is unacceptable and asserted that security forces are obliged to ensure safety of all protestors during times of demonstrations.

"The moment someone holds a Molotov cocktail intends to initiate violence," Davutoğlu said, adding that such people cannot claim that they are using their democratic right and reject intervention.

He explained that necessary regulations have been made in accordance with examples from around the world where Molotov cocktails are considered weapons.

"Molotov cocktails are tools that perpetrators use to attack," Davutoğlu said, referring to the incident that took place on Oct. 5-6 when pro and anti-PKK groups clashed, set ambulances on fire, attacked schools and libraries and 36 people lost their lives.

Another feature of the reform package is the increase in penalties for narcotics as it will treat dealers of the synthetic drug Bonzai as terrorists while penalties for drug dealers near schools will be doubled as Davutoğlu pledged that the government will not permit drug dealers to get near schools. He further said that precautions will be taken for those who call for violence through social media and condemned messages that call for armed uprising through Twitter.

Other features of the reform package will include regulations for disabled, elderly and sick citizens as they will be able to give testimony at home rather than at courthouses or police stations. Similarly, a draft law proposal will be presented to Parliament pertaining to workplace safety and protection of confidential data while e-commerce consumer rights will be protected by the government. Additionally, he reported that Istanbul Arbitration Courts will be established by the government.

Davutoğlu concluded by saying that the reforms will be conducted in accordance with the EU Harmonization Committee.