Turkey's EU accession not to be halted by Greek Cypriots 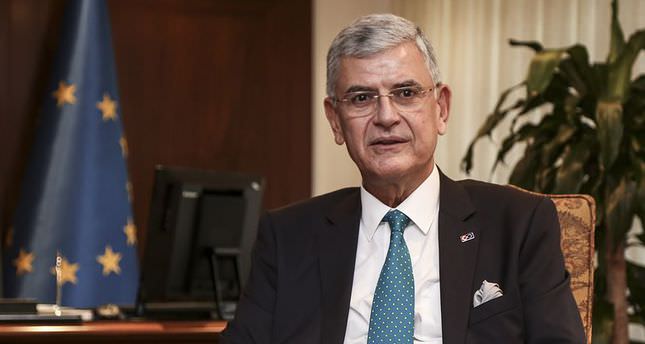 by AA Oct 22, 2014 12:00 am
Turkish officials expect the EU to fulfill its responsibility and reject a complaint by the Greek Cypriot administration aimed at halting Turkey's progress toward EU membership.

The Greek Cypriot administration announced Tuesday that it would attempt to block Turkey's EU accession talks in response to Ankara's gas exploration in waters off the so-called exclusive Greek Cypriot economic zone.

Bozkır said he expects the EU to reject the complaint, which is intended to prevent the opening of new chapters in Turkey's EU accession talks.
"In doing so, the EU will fulfill its responsibility towards Turkey," he said.

The Greek Cypriot administration has said it will not give their approval to open new chapters.

Turkey, which first applied to join the bloc in 1987, must comply with 35 "chapters" setting out reforms needed to become a member. So far, 14 have been opened while 17 remain blocked and a further four have yet to be discussed.

The island of Cyprus has remained divided into Greek and Turkish parts since a Greek-Cypriot coup was followed by a Turkish peace mission to aid Turkish Cypriots in the north of the island in 1974.

Bozkır said Monday's European Commission report on visa liberalization was positive and an important step in the so-called roadmap for Turkish citizens to be able to travel to the 28-nation bloc without a visa. The commission is the EU's executive arm.

The EU's first progress report on the visa roadmap says Turkey has been "effective" in its efforts to meet the bloc's requirements for visa-free travel.

"There are 70 requirements from Turkey listed in the report, and we have met all but nine of them," Bozkır said. "Some of these requirements have been fulfilled partially while the others have been met in full."

Bozkır said this was the first of the progress reports the commission would be issuing within the next three years. He said the readmission agreement would take effect upon the release of the final report, giving the green light to visa-free travel across the EU for Turkish citizens.

"Turkey has the right to terminate the readmission agreement within six months unless the visa liberalization dialogue fails," Bozkır said, adding that so far everything has been going well.

And he said Turkish citizens are benefiting from the improved relations.

"The ratio of declined visa applications has dropped from 7.5% to around 6%," Bozkır said. "There has been a drop in illegal immigration as well.

The European Commission launched a visa liberalization dialogue with Turkey on Dec. 16, 2013, setting out a list divided into five chapters of what Turkey must achieve to enable Turkish citizens to travel to the EU without a visa. The dialogue was initiated in parallel with a readmission agreement that would result in illegal migrants who enter Europe via Turkey returning to Turkey.