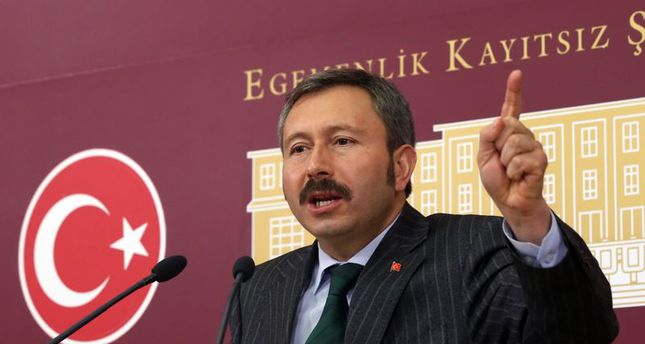 Independent deputy İdris Bal, who resigned from the ruling Justice and Development Party (AK Party) in January, said that they are in preparation to set up a new political party emphasizing that the party will include people from all strata of society. Speaking to journalists on Wednesday, Bal said that they have been working almost two years to set up this party. "We have been working on it for a long time with our friends from different backgrounds. Our work has now reached maturity to set up a political party. We will explain further in due time," Bal added.

According to political circles in Ankara, the name of the new party will most likely be the Merkez Party – the Center Party – and the new party will aim to attract voters from center-right as well as center-left circles. Former AK Party deputies Hakan Şükür, Ertuğrul Günay, İdris Naim Şahin, Erdal Kalkan and Hasan Hami Yıldırım, who resigned from their party just after the Dec.17 and Dec.25 operations, which were allegedly carried out by members of the Gülen Movement who infiltrated the police and judiciary with the aim of overthrowing the government in late 2013, are also likely to join the new political party.

Besides this, leaked voice recordings of Süleyman Hamit Müftigil, who is known as one of the people in the circle of imam Fettullah Gülen, described Bal and other Gülen-affiliated deputies as "saltshakers." In the leaked recording from last October, which was two months before the Dec.17 operation, Müftigil clearly said that he is expecting large political turmoil in the coming months and that they are in preparation to establish a new political party: "I could even get a saltshaker a parliamentarian," implying that he could nominate any person he wants to be a deputy in the Parliament. Müftigil also said in the recording that they would make a show of their influence in the politics.

Political analysts have given little chance for a new party in the upcoming June 2015 election since its leaders and political program still remain unknown. Furthermore, recent Turkish political history is full of examples of the failure of political movements that were formed by deputies who resigned from main parties. For instance, in 1997 a group of deputies who resigned from the center-right True Path Party (DYP) set up the Democratic Turkey Party (DTP). The chairman of the party was Hüsamettin Cindoruk, who was a former chairman of the DYP, and in the 1999 elections they received less than 1 percent of the vote. In later years they tried to survive with different chairmen and names and in 2008 the party decided to merge with another party. Center-left political circles have also experienced similar failures. In 2002, former Foreign Minister İsmail Cem resigned from the Democratic Left Party (DSP) ahead of parliamentary elections and formed the New Turkey Party (YTP), however after election failure they closed the party and merged with the main opposition Republican People's Party (CHP).