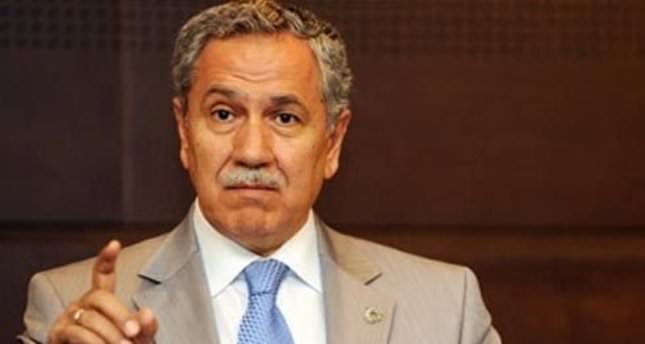 by Ali Ünal Oct 24, 2014 12:00 am
Deputy Prime Minister Bülent Arınç said yesterday on A Haber news channel that the government is currently working on a new reform package that will attempt to tackle the age-old problems related to the country's Alevi community with the government set to launch the new package by the end of this year. "Our government is currently working on a comprehensive reform package to meet the demands and expectations of our Alevi citizens. In this respect a working group will be established upon the request of Prime Minister Ahmet Davutoğlu and this working group will conclude and announce their work by the end of this year.

Arınç said that all the work in this field will continue under the coordination of Prime Minister Ahmet Davutoğlu, further adding that the Alevi opinion leaders will also be involved in the reform package's preparation process to satisfy their demands.

The main expectation of Alevi communities from the reform package will be the status of "cemevis." The Alevi population uses houses of worship known as cemevis rather than mosques as centers of worship and prayer. Currently, the cemevi, which literally means a house of gathering, is not officially acknowledged as a place of worship despite persistent demands on the matter from the country's Alevi community.

According to sources in Ankara, the current reform package will not bring any special definition for cemevis, however, the reform package will likely offer Alevi religious figures (dede) a salary after they are officially certified as religious leaders. The plan will also aim to make all Alevi and Bektashi associations and foundations affiliated with the Foundation of Hacı Bektaş-ı Veli and suggests establishing a new Deputy Directorate under the Directorate of Religious Affairs (DİB) to work exclusively with Alevi's issues.

Speaking on the issue, Professor Mehmet Görmez, the head of the Directorate of Religious Affairs, said in his exclusive interview with Daily Sabah that Alevism cannot be depicted as a minority or a marginalized community in Turkey. Regarding the status of cemevis, Mehmet Görmez said that the state or state institutions should not define Alevism nor should a theological discussion be started and therefore this subject should be evaluated within the context of human rights and freedoms. "The directorate does not have the jurisdiction to give any theological verdicts. Cemevis should be maintained for what they mean for Alevis. We have always tried to remove any obstructions that prevent Alevis from practicing their beliefs and we will continue to do so. The main dispute is about giving a status to a place, a power I don't possess. However, if there are any legal obstructions, these should be removed. This dispute should be ended by providing freedom to Alevi citizens to live and practice their beliefs and identities. This should be done regardless of their house of worship," Görmez added.

In previous years, the Justice and Development Party (AK Party) government has taken a series of steps to understand and respond to Alevi identity-based claims. The government initiated the "Alevi Opening" in 2010, a belated yet sincere attempt to understand the "Alevi Issue" and respond to the demands of Alevi citizens. The Alevi opening was included in the government agenda as part of the Sept. 30 democratization package, but was later postponed on the grounds that there was no institution to represent Alevis in Turkey. The most recent meeting with leaders in the Alevi community, representatives of nongovernmental organizations and academics who specialize in issues concerning the Alevi community, took place in July when the former Prime Minister Recep Tayyip Erdoğan hosted an "iftar" meal in Ankara. In the meeting, government officials and Alevi representatives discussed the new Alevi reform package and shared their views.