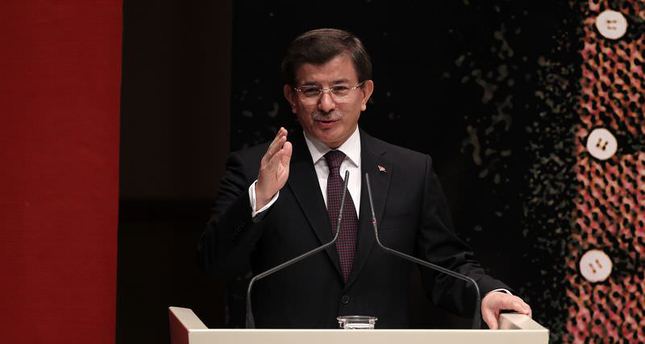 by Daily Sabah Oct 24, 2014 12:00 am
Prime Minister Ahmet Davutoğlu speaking at his party's caucus meeting on Friday has expressed that the Republican People's Party, the main opposition party of Turkey is incompetent and no real main opposition exists in the country.

"CHP is the Baath Party of Turkey as it remains silent while the Assad regime ruthlessly targets and kills civilians in Syria" Davutoğlu said, who criticized the main opposition for its problematic stance regarding the issue of Syria and Syrian refugees. Harshly criticizing the CHP leader Kemal Kılıçdaroğlu for his remarks last week in a televised interview when he said accepting Syrian refugees and opening Turkish borders is betrayal, Davutoğlu stated that those who have a conscious would not utter such remarks as it is inhumane to close your doors to the oppressed who are facing persecution in their own country.

"The people of Kobani have historically been entrusted to us, like the rest of our Syrian brothers and sisters" Davutoğlu said, who continued by stating that Turkey will continue to stand up against the oppressors and stand beside the oppressed even if the world is against Turkey. He elaborated on this notion and said that it is crucial for Turkey to have a conscience in order to become a global power.
Last Update: Oct 24, 2014 1:21 pm
RELATED TOPICS