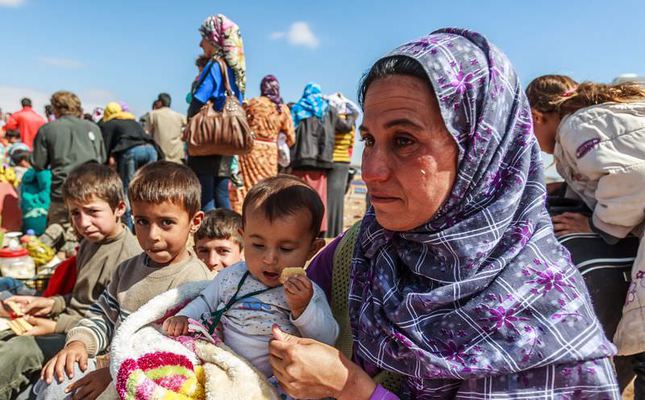 by Sena Alkan Oct 24, 2014 12:00 am
Urging all countries to do their part in the humanitarian crisis in Syria, U.N. High Commissioner for Refugees (UNHCR) Turkey spokeswoman Selin Ünal said, "The UNHCR is always ready for refugee influx or emergent needs, but we also call on all world countries for extending the helping hand in increasing refugee crisis. It is an international responsibility."

Turkey is set to face a new influx of Syrians as refugees from war-torn Syria are no longer welcome in Lebanon. Lebanese Social Affairs Minister Rashid Derbas announced on Thursday that it will not accept any more refugees from neighboring Syria except in what authorities deem to be "exceptional" cases.

Lebanese information minister, Ramzi Jreij, said the country cannot handle any more refugees and that the refugees who are already in Lebanon will be encouraged to leave. Lebanon's move prompted Turkish authorities to take precautionary measures considering a possible wave of refugees seeking a possible safe haven to be established along Turkey's border either by its own efforts or with an international initiative on the table once again. According to government sources, a decision to set up a safe zone within or beyond Turkish borders is a matter of time, as the issue occupied the agenda of a Cabinet and security summit meeting. Ankara seeks to meet the requirements of new refugees in a safe zone and encourage those living in Turkey to resettle in the zone. The possibility aroused curiosity as to what the reaction from anti-Islamic State of Iraq and al-Sham (ISIS) coalition members would be. Sources close to the government believe "the coalition has no right to object to a safe zone within Turkish borders, but when it comes to building it beyond the borders, any objection will force Turkey to assert, 'Find a solution, then.' "

Crossing the border barefoot, in wheelchairs or crawling while trying to carry their belongings – some heavier than their own weight – Syrians have been fleeing to Turkey for four years since the Syrian uprising began with calls for democracy and freedom in the country but has since turned into a savage civil war killing thousands of people. The recent ISIS advance is triggering fears of even more displacement of the Syrian population.

War-torn Syrian refugees in Turkey who have seen how life can be ruined by both civil war and the terrorism that has metastasized in the region, continue their struggle. Agencies including the UNHCR, Turkish Red Crescent and Turkish Disaster and Emergency Agency (AFAD) provided humanitarian aid for those who crossed the border with heavy hearts.

Already working to relieve the pains and living conditions of its war-weary Syrian neighbors, the UNHCR in Turkey is in cooperation with AFAD and leading the efforts of other U.N. agencies to embrace Syrian refugees.

"There are more than 1.6 million Syrian refugees in Turkey. Considering all variable dynamics, we are always prepared for an influx or emergent needs," said the spokeswoman. She added that there is still no enough financial support to UNHCR.

Expressing the UNHCR's gratitude to Turkish citizens for their sustainable hospitality toward Syrian refugees for three years, the spokeswoman said that the U.N lauds Turkey's efforts in hosting Syrian refugees.

Refugees crossing Turkish borders are first checked by doctors to determine their medical condition. Their urgent needs such as nutrition and warmth are also met. As soon as they enter the border they are registered by a coordination center set up in cooperation with the UNHCR and AFAD.

AFAD spokesman Doğan Eşkinat said that Turkey is ready for the worst-case scenario in terms of future refugees as it has been home to more than 1.5 million refugees in the last three years. Turkey spent $4.5 billion for Syrian refugees, Eşkinat said and that AFAD cooperating with other organizations takes all necessary steps to ease the lives of Syrian refugees.

Even though Turkey helped relieve the refugee burden from the shoulders of regional countries and the world by taking in 2 million Syrians, there is still a considerable number who had to leave their native land and wait along the borders in the hope of finding a safe roof over their heads.

Criticized by most, EU countries and the U.S. remain extremely reluctant to accept Syrian refugees and left the burden of dealing with the flood of people to countries neighboring Syria, such as Lebanon, Turkey, Jordan and Iraq. Both Turkey and the U.N. urged EU countries to resettle Syrian refugees seeking shelter. Even though Syrian refugees are increasingly in need of shelter, only a small number of war-torn Syrians have found shelter in EU countries. According to the EU, almost 60,000 Syrian refugees have declared political asylum there since the start of the conflict in Syria, the majority in Germany and Sweden.