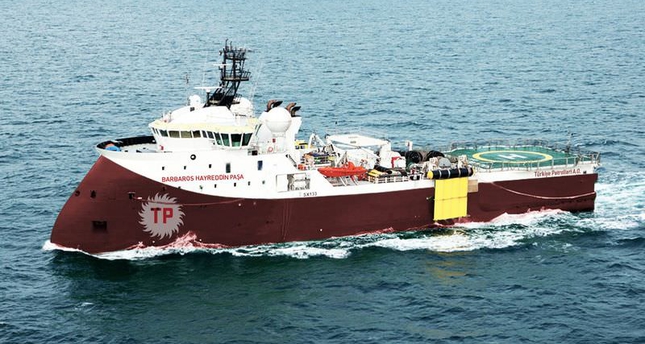 by AA Oct 24, 2014 12:00 am
Turkey on Friday rejected Greek accusations of sea law violations in the waters around Cyprus.

The Greek Foreign Ministry accused Turkey of violating the law of the sea by sending an oil and gas exploration ship to the eastern Mediterranean in the first week of October.

Greece is in a "misperception" about the peace talks for the island, the statement said.

Greek Foreign Minister Evangelos Venizelos had claimed that Turkey sabotaged negotiations between Turkish and Greek Cypriots, which were suspended by Greek Cypriot leader Nicos Anastasiades early this month following reports that a Turkish warship had been sent to monitor Greek Cypriot hydrocarbon exploration.

The Greek foreign minister also claimed that Turkey attempted to create a crisis by sending the ship at a time when the international community's attention was focused on combat with the Islamic State of Iraq and the Levant, and crises in both the southern and eastern regions of Europe.

"The main aim of the talks are to establish two states in the island with equal rights," Bilgic said. "Ignoring that and legitimizing the actions of the Greek side clearly cannot help anything."

The spokesperson also recalled that steps taken in the eastern Mediterranean while ignoring the international law will only cause more problems.