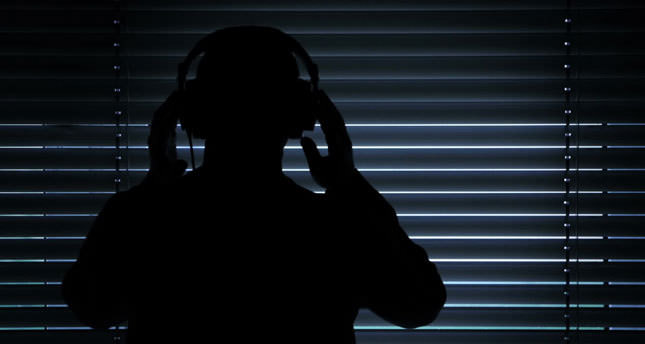 by Daily Sabah Oct 25, 2014 12:00 am
A recent investigation by the Ankara Police Department against Gülenist-affiliated police officers revealed that 83 people, including deputies and provincial chairmen from the ruling Justice and Development Party (AK Party) and the opposition Republican People's Party (CHP) and Nationalist Movement Party (MHP) as well as judges, prosecutors, police chiefs, journalists, and journalists' wives were wiretapped on via forged documents and false names. High-level officers from Turkey's Scientific Research Council (TÜBİTAK) and the Machinery and Chemical Industry Institution (MKE), which carry out military and strategic projects were also on the list of people wiretapped. The investigation results also revealed that false evidence and accusations were presented to get court orders to track 40 people, while fake names were presented to track 26 others. The probe also revealed 17 people were wiretapped illegally.

The Ankara Police Department›s investigation, which is based on a report prepared by the Interior Ministry's Inspection Board, reveals those eavesdropping activities focused on the years 2010 to 2013 have no legal basis. The investigation report also reveals two advisors to main opposition party CHP leader Kemal Kılıçdaroğlu and MHP leader Devlet Bahçeli's executive assistant, chief of the security team, deputy general secretary of the MHP and deputies from both parties were also illegally wiretapped.

Beside political parties, illegal wiretapping activities also targeted institutions responsible for military and strategic projects, such as TÜBİTAK, the MKE and the Turkish Armed Forces. The former TÜBİTAK president and the president of the National Cryptology Institute, engineers who are responsible for defense projects to deter surface missiles, and senior level officers from the MKE, which is the main manufacturer of military arms and ammunition factories, are also on the list of people wiretapped by Gülenist-affiliated police officers. The report also determined that fabricated evidence was produced to link MKE officials with terrorist organizations, such as the far-left terrorist Revolutionary People›s Liberation Party–Front (DHKP-C), al-Qaida and PKK, to obtain court orders for wiretapping activities.

Four journalists and the wife of journalist Ahmet Şık were also among the 83 people eavesdropped on. Şık is an investigative journalist whose book "The Imam›s Army," which investigated the controversial Gülen Movement of Islamic preacher Fethullah Gülen, led to his detention for a year in 2011–2012 and the book being seized and banned.

It has recently been revealed that police officers in Adana province allegedly linked with the Gülen Movement wiretapped and saved the private conversations of 164 people for blackmail. The findings revealed that Gülenist infiltrators wiretapped private conversations of 164 people, which does not constitute a crime, and backed up the recordings for their own purposes via a pirate program named TİBNOT. The recordings, which were secretly kept by the officers in question, were purported to have been destroyed in a fabricated document.

Officials in the counter-terrorism unit of the Adana Police Department stated that the conversations that were wiretapped and later archived by the infiltrators did not include information that could constitute a crime; however, the recordings could be used for blackmail.

Members of the Gülen Movement are notorious for engaging in illegally wiretapping people's phone conversations as well as encrypted phones. According to reports, a total of 304 separate wiretapping orders were issued for 76 encrypted phones, but more encrypted phones that might have been wiretapped may be found as the investigation continues.

Fethullah Gülen, who resides in the U.S. in self-imposed exile, leads the Gülen Movement, which has charter schools and organizations in hundreds of countries around the world. The movement is currently accused of attempting to infiltrate Turkish state institutions, including the police and judiciary, as well as unlawfully wiretapping thousands of journalists, politicians, top secret state meetings and encrypted phones belonging to government officials.

Prime Minister Ahmet Davutoğlu and President Erdoğan have made it clear that infiltrators will be held accountable for their betrayal and attempts to take over the state through a coup. Currently, dozens of Gülenist agents within the police force have been arrested, while more arrests are expected as police interrogate several other suspects and conduct an investigation into numerous institutions including the police department and TİB.