Erdoğan: There is a ‘superior’ mind in PYD’s Kobani plots 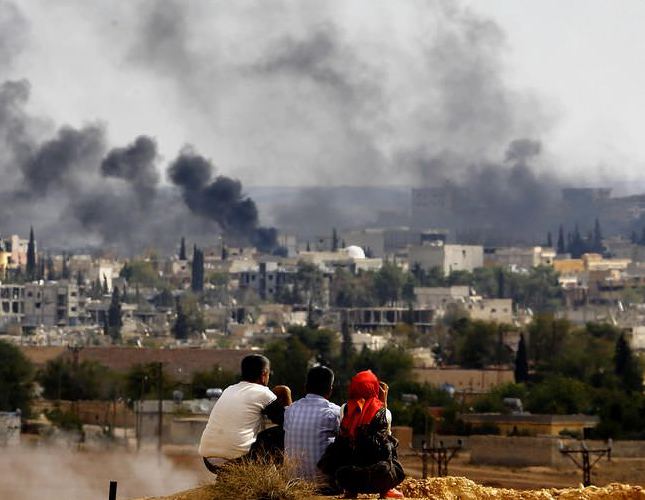 The Free Syrian Army (FSA) and the Kurdistan Regional Government (KRG) had offered armed assistance to save Kobani from the Islamic State of Iraq and al-Sham (ISIS), but the Democratic Union Party (PYD) had objected in fear of loss of influence, said President Recep Tayyip Erdoğan, accusing the PYD, which is terrorist PKK's Syrian wing, of being part of a wider plot against Turkey's territorial integrity, especially to the border along Syria and Iraq. Speaking to journalists on his way back from Latvia and Estonia, he reiterated that he did not favor the U.S.'s position regarding the PYD as a separate organization from the PKK. "I have told [U.S. President] Barack Obama there is no way we can approve of the assistance they provide to the PYD since it is a terrorist organization just like the PKK," Erdoğan said. The president also criticized Iran of pledging support to jointly resolve regional crises, but when it came to concrete discussions between Turkey and Iran, it resorted to sectarian priorities rather than working together to display a united stance.

The U.S gave a cold shoulder to Ankara's concerns about supplying Kurdish fighters with weapons, insisting on providing the YPG with arms supplies, the Turkish government came up with a new strategy, which proposed to send Iraqi Kurdistan Regional Government (KRG) peshmerga forces to Kobani to help in the fight against ISIS.

Ankara later held talks with the Free Syrian Army (FSA) and vowed to support both forces to the end in their fight to defend the strategic town.

Ankara has been strongly against supporting what it sees as a terrorist organization given that the weapons provided such an organization could possibly later be used against Turkey. Foreseeing the risk, Ankara began seeking alternative ways to contribute to the anti-ISIS coalition. Ankara proposed that the U.S. administration support officially recognized armies such as KRG peshmerga forces and the FSA instead of the YPG forces of the PYD.

"Obama kept saying if Kobani falls, ISIS forces will boast over winning a victory against the entire coalition forces and the U.S., a concern that I find hard to understand as there are currently no civilians left in Kobani and that it is now an abandoned city."

Erdoğan also said that he had previously proposed that Obama speed up deploying pesmerga forces to Kobani. In response Obama said there was a shortage of weapons in Kobani and forces there would not be able to resist much longer.

"The PYD is unwilling to have peshmerga forces in Kobani as they fear the possibility that the forces in question might maintain a grip on the city. The plot will turn upside down in that circumstance for the PYD."

As the PYD was reluctant to receive aid from peshmerga and the FSA taking part in the fight against ISIS, Ankara's strategy to propose deploying the two armies revealed the political realities of the PYD and how saving Kobani could help them maintain control of the region.

"The target was sending 2,000 pesmarga soldiers to Kobani. They said they would send 500 in the first stage, but the PYD wanted to reduce the number to 155. They did not want any of them in Kobani and instead asked for heavy weapons from the KRG, but their proposal was rejected."

Erdoğan also said that the PYD consented to the FSA sending 1,300 soldiers to Kobani under the condition that they fight on a separate front. The move was considered part of the game played in the region by Erdoğan.

"We have to think straight. There is probably another mentality behind all these games. I personally do not think the PYD is capable enough to set such a solid plot. It is not as simple as it seems, nor is it randomly formed. There must be a superior mind directing this plot, which you should know," Erdoğan claimed, addressing the journalists.

According to government sources, the KRG will choose the forces that are scheduled to enter Kobani from Turkey by giving Ankara a list of names. Pursuing the goal of securing arms and controlling the forces to be sent to the region, Ankara wants to protect its sensitivity toward its position in the anti-ISIS coalition and plans to create an arms inventory to reclaim the weapons after the fight is over.

Ankara suggested peshmerga forces wear uniforms to prevent them from being associated with the PKK, which took up arms against Turkey to create an independent Kurdistan in southeastern Turkey. Ankara has stipulated that there are to be no Kurdish flags or arms during the peshmerga passage through Turkey.

Meanwhile, recent sources say peshmerga forces will not engage in direct combat in Kobani but will provide artillery support to YPG forces fending off ISIS militants there.