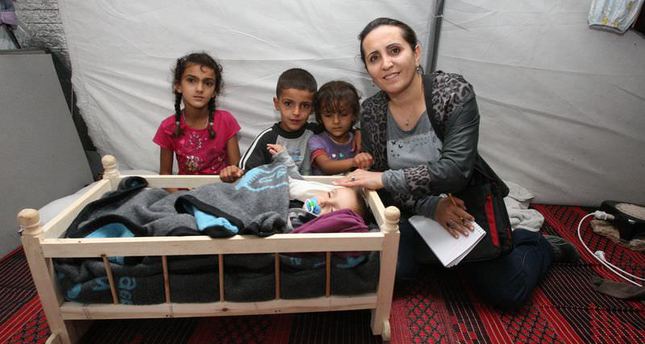 by Hazal Ateş Oct 26, 2014 12:00 am
We have no place to go, said a Syrian Kurd who was forced to leave the soil where he lived for years, leaving everything behind due to the ISIS threat spreading fear throughout the world. Syria's northern town of Kobani, where 200,000 people had to flee their own lands and what was once named the "last stop" due to its position as the region's railway joint, has been witnessing the close combat between Islamic State of Iraq and al-Sham (ISIS) fighters and Kurdish groups defending the besieged town. As the battle occupied the entire world's agenda and left the humanitarian crisis in the background, thousands of refugees who were forced to leave the town in one night found hope in the Turkish town of Suruç – only 15 kilometers away from Kobani – after walking, crawling for kilometers barefoot, or carrying their disabled family members with heavy hearts. Questions such as the paths of hope leading them to Turkey, how they felt when they first stepped on Turkish soil, when they realized the ISIS threat, whether they intend to go back and did they have an ID during the Bashar Assad regime are still waiting to be answered, while pictures show how a life, a culture and futures have been ruined in just three years.

The Sabah daily visited Syrian Kurds fleeing Kobani to stress the humanitarian crisis witnessed by those refugees both during the savage civil war in Syria and the ISIS advance that they never expected would reach their town. Turkey is currently home to 1.5 million Syrian refugees who have run away from the al-Assad regime since 2011. Those war-torn neighbors are exerting efforts to hold on to life to remove the pain of being homeless in their native land, while trying to carve out a new life in a different country. Suruç, a town in the southeastern Şanlıurfa province serves as shelter to the 200,000 Syrian Kurds who fled Kobani. Most of them feel that they are half Turkish thanks to their relatives living in the southeast of Turkey. Temporary refugee camps – also known as tent cities – were allocated for Syrian Kurds starting to cross Turkish borders on Sept. 19. Along with those camps, businesses, sport and culture centers and dormitories are all full of Turkey's neighbors from Kobani. With the arrival of Syrian Kurdish refugees to Suruç, the population of this tiny southeastern town increased threefold. Nearly every family in Suruç accepted a Syrian Kurdish family in their home and shared their bread with them to relieve their pain to a certain extent.

"The only hope we had was to reach the [Turkish] border," said Aunt Zino, a 75-year-old who lived in a tent built by Turkish Presidency of Disaster and Emergency (AFAD) with her family of 16. Aunt Zino said that her journey with her two disabled daughters to the Turkish border started on Sept. 16 when the ISIS threat approached the town.

"My neighbors carried my [disabled] daughter. When we heard the news of the ISIS advances toward our village, we left everything behind. Our homes, our animals, everything you can imagine." Her son, Mustafa Kadir, stated that they were aware of the ISIS threat for the last year, but they never thought that ISIS was strong enough to advance to their town until they saw its tanks. Fleeing Kobani with his four children and his wife, Faruk Mustafa said that they even had an identification card under the Assad regime. "We do not want to go back these days. The Assad regime made life miserable for these people. We do not want a life with no ID and under oppression," added Mustafa. Turkish authorities and the people of Suruç coordinated efforts to relieve the pain of Syrian Kurds. The ruling Justice and Development Party (AK Party) Suruç provincial organization and youth branches work in cooperation in the dormitories and tents the refugees live in. Since their arrival in Suruç, AK Party Provincial Chairman Mehmet Yavuz made note of essentials for the Syrian neighbors and delivered them to AFAD. Speaking fluent Kurdish, Yavuz voluntarily guided doctors and AFAD personnel to build close communication between the refugees and personnel in Suruç. A tent city for 30,000 refugees is being set up in Suruç. In these tent cities, schools, a mosque and tents with bathrooms are expected to be set up before the winter season. Muhammed Nur, who was a renowned lawyer in Kobani, emphasized the necessity of building a safe zone along Turkish borders. Reminding that there are other Kurdish groups in Kobani along with the Democratic People's Party (PYD), Nur said, "Kurdish groups did not act together due to their interests. They gave priority their own interests. Nobody won, but we were the most adversely affected ones. We lost our land."