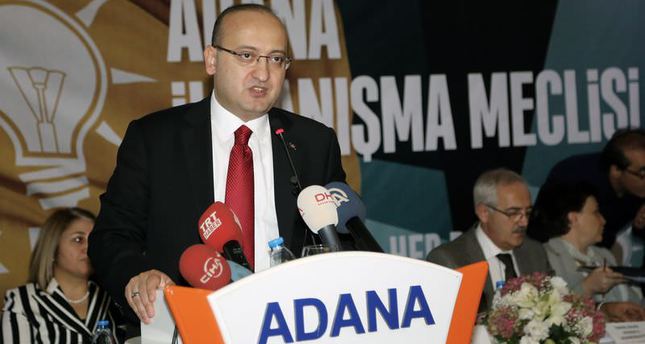 by AA Oct 27, 2014 12:00 am
Turkey's Deputy Prime Minister, Yalçın Akdoğan, slammed the outlawed Kurdish Workers' Party, also known as the PKK, on Sunday for the latest acts of violence in Turkey, warning that "those who have appealed to the power of guns have always lost."

"The gun is not the cure, it is trouble. Violence is not the solution, it is a scourge," Akdoğan said speaking in Adana, southern Turkey.

Three soldiers were killed on Saturday afternoon by two masked men in the eastern Turkish province of Hakkari, while they were in the town center and dressed in civil clothing, authorities have said.

Five people were detained on Sunday in connection with the shooting.

This was the latest act of violence in Turkey, as nearly 40 people died in violent protests earlier this month, mainly in the heavily Kurdish-populated southeastern provinces.

Most casualties were due to street clashes between rival groups.

Akdoğan described the shooting of "civil clothed, unarmed" people as "the biggest cowardice."

He said that the PKK was having a "panic attack" and accused it of disrupting the reconciliation process, which was launched two years ago.

Akdoğan said that because the government is determined to reach results, provocateurs have been activated in an attempt to disrupt the process.

He said that these provocateurs and their patrons will be held to account.

The "reconciliation process" is an effort launched by the Turkish government two years ago to bring an end to the decades-long conflict with the outlawed PKK, which is listed as a terrorist organization by Turkey, U.S., EU and NATO.

"The state will hold the murderers of those soldiers accountable," he vowed and added that no compromises will be made on public order and security.

"Violence produces persecution and we are seeing this," he said.

Akdoğan added that on one side there is a state which serves the people and extends the hand of compassion and mercy, while on the other hand "we have an organization that is burning and exerting violence and pressure," referring to the PKK, which is recognized as a terrorist organization by Turkey, the US, EU and other countries.