MHP leader warns against provocateurs, calls to stay away from street violence 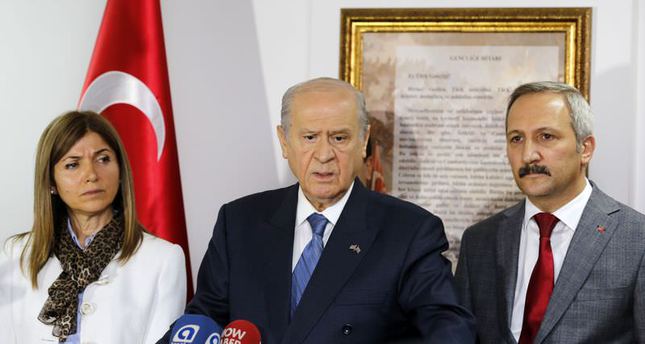 by Daily Sabah Oct 27, 2014 12:00 am
Devlet Bahçeli, the leader of Nationalist Movement Party (MHP) has recently issued a circular to MHP's local party organizations prior to the 11th Major Party Convention calling on his supporters to remain calm and not be provoked by calls to take to the streets, following the killing of three soldiers by the PKK over the weekend.

"MHP will not be pulled into joining the hostile side, which calls our party to head to a dead-end street regardless of the reason" said the party leader, who urged his supporters to stay away from all sorts of violence, fighting and chaos. "Turkey was not established on the streets nor can it simply be handed over to street provocateurs" Bahçeli stated. He continued by warning MHP supporters not to let newsmongers and infiltrators incite hatred, while warning that those who attempt to create unrest and chaos within the party will face legal consequences.

In the statement, Bahçeli criticized the AK Party for allowing the Iraqi Peshmerga forces to pass through Turkey to reach the Syrian town of Kobani which is besieged by the self-proclaimed Islamic State of Iraq and al-Sham (ISIS). He argued that the arms aid given by foreign powers to Kurdish forces fighting ISIS militants in Kobani are dangerous, as he claimed that the arms will be used by terrorist Kurdish organizations against Turkey once the risk of ISIS is alleviated.

Bahçeli also harshly criticized Kemal Kılıçdaroğlu, the leader of Republican People's Party (CHP) for not recognizing People's Protection Units (YPG) –known to be the armed wing of the Democratic Union Party (PYD) - as a terrorist organization. "The leader of the opposition has already fallen into the trap of separatist terrorists and has shamelessly acted as an interpreter of bloody aspirations" Bahçeli claimed.

MHP is currently preparing to inspect party members prior to the general elections in efforts to ensure members of the Gülen Movement do not infiltrate the party.

The PKK, recognized as a terrorist organization by Turkey, EU and the US, operated as a militant organization from 1984 to 2013 and attacked numerous civilian and military targets, resulting in thousands of casualties. They signed a cease-fire with the Turkish government on March 21, 2013, when the government initiated the reconciliation process followed by a series of democratic reforms to improve the rights of Turkey's Kurdish population.

Recently, the government established the Reconciliation Process Committee in an effort to draw a roadmap for the steps that will be taken by the government, and for the development of effective strategies and policies to put a permanent end to terrorism in the country.

Three soldiers have recently been killed by PKK militants in Turkey's Southeast while clashes between pro and anti-PKK Kurds have resulted in the killing of over 35 people.
Last Update: Oct 27, 2014 9:16 pm
RELATED TOPICS