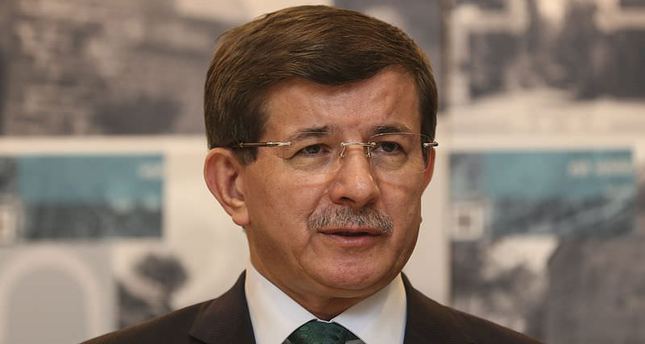 by AA Oct 28, 2014 12:00 am
Turkish Prime Minister Ahmet Davutoğlu said in an interview broadcast Tuesday that coalition forces should work together to save the Syrian border town of Kobani.

Turkey will not interfere with the operation of other forces as long as the goal is a democratic Syria without the current regime in place, he said.

"We never allowed any foreign fighters to go inside Syria," Davutoğlu said. "There is no evidence that Turkey has any link, any cooperation, any support to these kind of groups. These groups are a threat to Turkey as well."

He also said Turkey had declared the self-proclaimed Islamic State of Iraq and Sham (ISIS), a terrorist organization last year. The interview with the BBC was recorded Monday.

The prime minister stressed the importance of training and equipping the Free Syrian Army so the Assad regime -- or the outlawed PKK -- will not come back.

Turkey, the U.S. and the EU list PKK as a terrorist organization.

"We will help any forces, any coalition, through airbases or through other means if we have a common understanding to have a new pluralistic democratic Syria, and to fight against all crimes against humanity committed by ISIS as a terrorist organization or committed by the brutal regime," he said.

ISIS is fighting on various fronts, pushing toward Baghdad as well as conducting an offensive against Syrian Kurds near the Turkish border in the town of Kobani.

They have already taken control of large swathes of territories in Iraq and Syria.