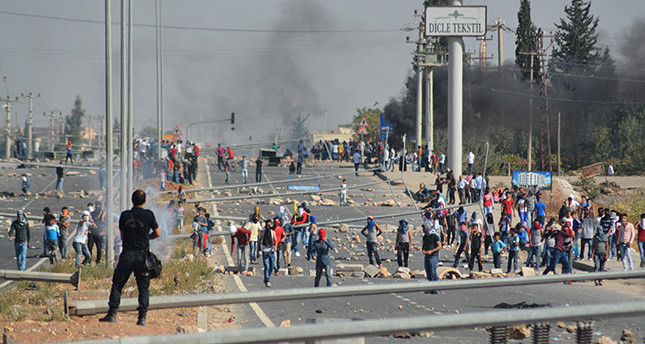 PKK and linked fringe groups are trying to undermine the reconciliation process, experts say, but add that the government remains focused on public order and peace

The reconciliation process, started between Ankara and the Kurds to end the decades-long Kurdish insurgency, has been undermined by some pro-PKK groups that caused tensions to escalate by attacking Turkish soldiers and disturbing public order since early October. The Peoples' Democratic Party's (HDP) call for street demonstrations led to hundreds of PKK supporters protesting in the streets, which turned into violent clashes between pro and anti-PKK groups. The fierce protests on Oct. 6-7 claimed nearly 40 lives and left scores of injured people in their wake. Following the protests, Turkey's political agenda was occupied with questions over what should be expected from the reconciliation process in the upcoming term, to what extent these incidents will affect the process and whether the government's commitment on establishing public order would shelve the reconciliation process.

In comments to Daily Sabah, Kurdish intellectual Vahdettin İnce asserted that some fractions of the PKK were triggered by certain circles to undermine the reconciliation process.

Explaining his skeptical view of the deadly attacks, İnce reiterated that the PKK is based on violence and it perpetrated similar attacks in past years adding, "Some want to use the first possible suspect [the PKK] to drive [Turkey] to leave the table so as to sabotage the process."

"Undoubtedly, it was PKK militants who pulled the trigger [on Turkish soldiers], but the main question is who pushed them to pull the trigger. There is a mastermind behind the PKK's deadly attack," İnce added.

The PKK's urban youth wing, the Patriotic Revolutionary Youth Movement (YDG-H), killed three off-duty Turkish soldiers over the weekend. The latest deadly attack not only jeopardizes the reconciliation process, but also fuelled rage toward the PKK by some as Ankara stressed that "no concession will be given to those who disturb public order, as establishing public order is nonnegotiable."

The murders came only a day after three PKK militants were shot dead in the eastern city of Kars when a fight flared-up after the militants attacked security forces and a dam in Kars's Kağızman district. The curious timing raised questions that the killing of the soldiers was in retaliation. "Even if it is retaliation, it aims to undermine the process. Turkey should find the perpetrators without halting the process," İnce said.

Prime Minister Ahmet Davutoğlu said that if there is a possibility of a back story to the killings of the soldiers it should be found. Assertions by pro-PKK groups that Ankara failed to take adequate action against the Islamic State of Iraq and al-Sham (ISIS) after the terrorist organization advanced on and sieged Syria's northern Kurdish town of Kobani, caused tension to escalate. They asked Ankara to allow a corridor for Iraqi Kurdish fighters to cross through Turkey into the besieged town.Davutoğlu said on Sunday, "The reconciliation process is directed to the Kurdish community, not the PKK, which is believed to be responsible for the latest deadly attacks on the three Turkish soldiers," by adding that Ankara has been sensitive since the beginning of the process to refrain from harming it, but no negotiation over public order is possible. İnce said that the biggest safeguard of the process is Kurdish and Turkish people's fear of a possible end to the process.

Ali Bayramoğlu, a political scientist and member of the Wisemen Committee, in an exclusive interview with the daily Yenişafak, said that the Kurdish issue and its reconciliation is related not only to Turkey, but also beyond the country's border, referring to the protests that mushroomed after the ISIS siege of Kobani.

"The reconciliation process started 18 months before and there have been no clashes during this period. Just as PKK leader Abdullah Öcalan, who is serving a life sentence on İmralı Island, and the state reached an agreement, these incidents erupted. The reason behind the protests is Kobani, which means the Kurdish issue, and its reconciliation is tending to pass through Turkish borders and become regionalized," Bayramoğlu said.