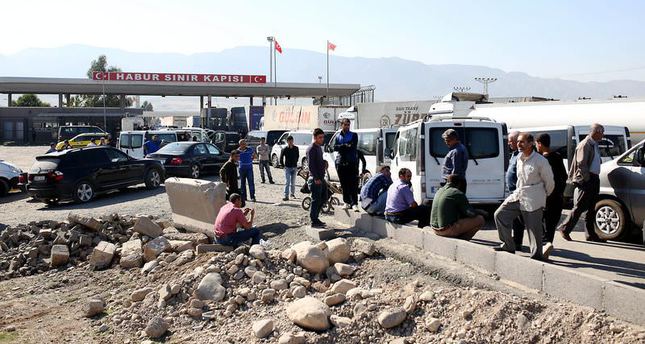 by Daily Sabah Oct 28, 2014 12:00 am
Fines ranging between TL 3,000 ($1,345) and TL 4,000 have been issued to those who cross the Turkish-Syrian border for violating an existing law regarding border crossing. Thousands of people have been crossing the border, purportedly to give support to Kurdish militants of the People's Protection Units (YPG), who are defending the Syrian city Kobani, which is currently under siege by the Islamic State of Iraq and al-Sham (ISIS). Roughly 1,000 Kurds, who have been detected via a camera placed on the border, will have to pay a fine for "border violation." Those who are sentenced are expected to be informed about the fine once the local authorities approve it. As clashes between Democratic Union Party (PYD) forces and ISIS militants continue apace, forcing thousands of Syrian Kurds to take refuge in Turkey, solid measures have been taken by the government to prevent any provocative activities that might cause tensions on the Turkish-Syrian border. The border has been witnessing clashes between Turkish police forces and Kurdish radicals since Sept. 16.

Kurdish radicals have been coming from various eastern provinces, such as Hakkari and Şırnak, seeking to cross over to the Syrian side of the border to help Kurdish fighters defend Kobani against ISIS attacks. Those who have been able to make it into Syrian territory, by cutting and setting fire to the wires on the border, have ignored warnings that they would be subjected to legal proceedings for their offense. The group, which clashed with police in a so-called demonstration of support for the Kurdish fighters in Kobani, returned to the border a couple of hours later shouting slogans. Initially they were not allowed in via Suruç and were instead directed to the Yumurtalık region five kilometers away by security forces, which was the only location to enter Syria. The group who walked to Yumurtalık was later let back into Turkey from the region. Likewise, 500 People's Democracy Party (HDP) members out of the 2,000 who had set off from İstanbul's Kadıköy district in 35 buses in order to join the fight for Kobani had to return to Turkey a couple of hours after their crossing. Following their entry into the region, legal proceedings began against the trespassers on the grounds that they had violated the "law of passport." A fine of about 3,000 to 4,000 Turkish lira is expected to be issued to those who illegally crossed the border. The opposition HDP and Democratic Regions Party (DBP) coordinated the transport of members of the Kurdish community across the country to the border. They were looking for ways to travel to Syria's Kobani to join Kurdish militants in the fight against ISIS. Exploiting the turmoil on the border, Kurds affiliated with the two parties confronted the Turkish security forces deployed there.