Erdoğan, Hollande to discuss details of safe zone in Syria 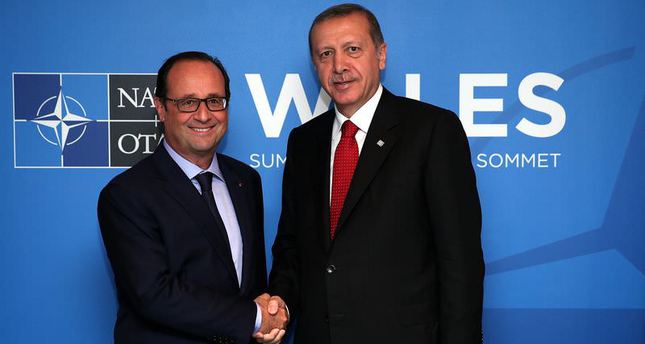 by Daily Sabah Oct 29, 2014 12:00 am
President Recep Tayyip Erdoğan will pay a one-day working visit to France this Friday where he will, according to sources within the presidency, discuss the idea of setting up a safe zone between Turkey and Syria, Turkey's long-range missile tender and other regional issues. Bilateral relations are expected to be discussed in the meeting between Erdoğan and French President François Hollande.

The idea of the working visit was brought up by Erdoğan during a telephone conversation between the two presidents on Oct. 8, just after Hollande expressed France's support for establishing safe zones for Syrian refugees and opposition forces under a no-fly zone in Syrian air space along the Turkish border. Hollande also said last week that there are international issues which France needs to discuss with Turkey.

French Prime Minister Manuel Valls recently said in a parliamentary session that "France supports the idea of creating the buffer-zone or a safe zone that Turkey demands," for displaced people. Hollande's office also released a statement recently supporting the safe zone. "[The president] insisted on the need to avoid massacres in the north of Syria. He gave his support to the idea proposed by President Erdoğan to create a buffer zone between Syria and Turkey to host and protect displaced people," the statement read. The statement added that the two countries also agreed on the need to give more support to the moderate Syrian opposition to fight Syrian President Bashar al-Assad and Islamic State of Iraq and al-Sham (ISIS) militants.

Turkey's prolonged long-range missiles tender is also expected to be discussed during the bilateral meetings. In September 2013 Turkey's military procurement agency, the Undersecretariat for the Defense Industry (SSM), chose China's FD-2000 (HQ-9) long-range air and missile defense systems over Western competitors, including the Italian-French Eurosam's SAMP/T Aster 30 systems. The Chinese manufacturer of the HQ-9 missile system, the state-run China Precision Machinery Import-Export Corporation (CPMIEC), offered a $3.4 billion high technology transfer. Turkish government officials announced they preferred the Chinese offer due to its competitiveness and potential for co-production in Turkey. However, according to sources in Ankara, the Chinese company were unwilling to share information and be part of a joint production unit with Turkey, and the Italian-French company has therefore become a more attractive option. In addition to this Erdoğan recently said that Turkey was in talks with France on the purchase of a long-range missile defense system after disagreements on technology transfer with the Chinese company. Since last September's announcement, the bidding deadline has been extended five times and the procurement agency SSM is expected to announce the results of the long-awaited billion dollar long-range air and missile defense system tender at the end of this year.

During the one day visit, Erdoğan is also expected to meet with representatives from the French business world and will also deliver a speech at a university.