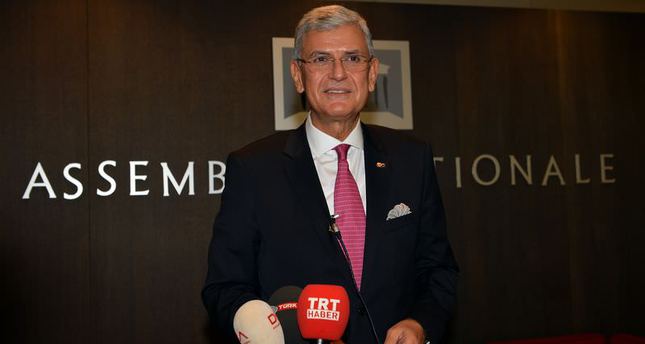 by Daily Sabah Oct 29, 2014 12:00 am
EU Minister and Chief Negotiator Volkan Bozkır believes that Europe is being unfair to Turkey regarding the Kobani issue.

Speaking at the French National Parliament's EU Commission during his visit to Paris, Bozkır claimed that an image of Turkey as a mere spectator to the incidents in Kobani has been built by some in Europe, before bringing up the fact that millions in the region, including 200,000 Syrian Kurds from the besieged Kobani, have found shelter within Turkey's borders.

Syria's northern town of Kobani has been under siege for a month with fierce clashes between the Islamic State of Iraq and al-Sham (ISIS) and Syrian Kurdish groups, such as the outlawed PKK's Syrian wing, the PYD, and its armed wing, the YPG, defending Kobani. U.S.-led coalition forces have resupplied Syrian Kurdish fighters by airdrops, Turkey, which is accused by some of not doing enough to help, has allowed Iraqi Peshmerga forces to enter Kobani through Turkey.

"Turkey faces many accusations on the Kobani issue. The first thing people ask me in Europe is Kobani. There is a misunderstanding," said Bozkır, adding that ISIS also poses a danger to Irbil and Baghdad, not just Kobani.

The EU minister said that Turkey will only take part in military action in the region if the coalition members are prepared to agree to certain demands, but added that none of the members have any intention of giving in to Turkey's demands.

"I suggest that Europe sends experts to train Kurdish groups [trained and equipped in Turkey to defend Kobani] instead of accusing Turkey," said Bozkır.

Speaking over the bilateral relations between Turkey and France, the EU minister touched upon France's role in Turkey's EU accession period and thanked French President Francois Hollande for his support in the opening of the 22nd chapter.

Reminding that there are four more chapters blocked by France, Bozkır said he believed France does not want to continue its stance and could open chapters in the future.

Responding to journalists' questions after his speech, Bozkır touched on the 1915 Armenian incidents and said that the decision over the 1915 incidents should not be made by politicians, but a research commission to be established by historians and academics.