PM: We do not want Assad regime, ISIS or PKK on our borders 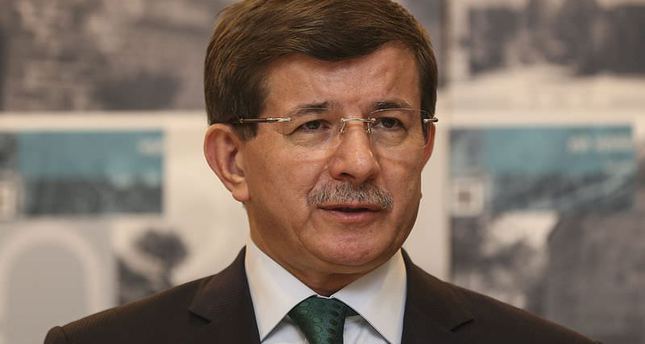 ISIS emerged as a consequence of the chaos in Syria, says the PM, reiterating his demand of the U.S.-led coalition targeting Assad as a prerequisite for Turkey to join the operation

Prime Minister Ahmet Davutoğlu on Monday, speaking in an interview with the BBC, said "There are three groups we [Turkey] do not want to see along our border: The Syrian regime, ISIS and the PKK," referring to the ongoing crisis in the region and clashes between the Islamic State of Iraq and al-Sham (ISIS) and the outlawed PKK.

With its 900-kilometer border with Syria, Turkey is the closest country to the current battle between Syrian Kurdish groups and ISIS that controls large areas in Iraq and Syria; thus, the government continuously stresses that fighting against ISIS alone is not enough, as the chaos gives rise to dozens of terrorist organizations. Turkey listed the outlawed PKK and its Syrian wing, the Democratic Union Party (PYD), as terrorist organizations and asserts that the current crisis in Syria is a result of the long-continuing crisis in the region where terrorist organizations have grown and spread due to the authority gap stemming from the regime of Syrian President Bashar Assad. The PKK, which took up arms against Turkey in 1984, is listed as a terrorist organization by the U.S. and the EU.

Davutoğlu told BBC reporter Lyse Doucet that Turkey will only take part in the operations of the U.S.-led coalition in Syria and Iraq if it takes military action against the Syrian regime's forces as well.

"Saving Kobani is very important but we should not forget that Kobani is just a result of a much bigger, more widespread crisis in Syria," said Davutoğlu, calling for a broader strategy.

Reiterating that the Kobani fight only began a few months ago, but the civil war in Syria has been ongoing for the last three years, Davutoğlu said that Kobani has become a symbol in the fight against ISIS and terror in Syria. The prime minister added that all parameters should be clear to allow anti-ISIS coalition members to use Turkey's bases for airstrikes and refueling.

The U.S. insisted that the priority is to fight against ISIS militants in Kobani now and to resupply the PYD, as Ankara is allowing Iraqi peshmerga forces to pass into Kobani.

Davutoğlu said that peshmerga forces and the Free Syrian Army (FSA) are ready to go into Kobani to defend the town against ISIS militants. Yet, the talks over sending these forces to Kobani have been marred by Syrian Kurdish groups, especially the PYD's Syrian armed wing, the YPG, asserting that they have enough fighters to battle against ISIS.

Even though the PKK's fractions in Syria are frustrated over Turkey's proposal to send peshmerga forces and the FSA with a goal to bolster Syrian Kurds in the town, in early October, pro-PKK Kurds in Turkey poured to the streets to protest against Ankara's policies with accusations that the government is helping ISIS militants and did not take action to defend the besieged town. A total of 40 people lost their lives in clashes between pro and anti-PKK groups.

The prime minister strongly dismissed those accusations in the interview and lashed out against critics, saying the government "did not want to be part of the game for a few weeks or months just to satisfy American or European public opinion."

"We do not just want to save Kobani," said the prime minister, adding, "We will take all the military and security risks whenever we see an integrated strategy and the light at the end of the tunnel."

Echoing his previous statements, Davutoğlu said that Ankara would only send Turkish troops into Syria when Western countries including the U.S. and European countries are ready to put their boots on the ground as well. But, Western countries have veered from this option now. In talks between anti-ISIS coalition figures and Turkey's political actors, training and equipment, a comprehensive military action, Ankara's no-fly zone and safe zone demands have constantly been on the discussion table between both sides.

Reiterating its no-fly and safe zone demands in all international platforms, Ankara made it clear that considering its close location to Syria and Iraq, a safe zone and no-fly zone is are essential for the country to take part in any military action.

Touching on intensive talks between intelligence, diplomatic and military representatives of the countries in the coalition, Davutoğlu asserted that Turkey's no-fly zone demand is about to progress.

Turkey has been welcoming more than 1.5 million Syrian refugees since the outbreak of the civil war and the prime minister said that, with the latest refugee influx on Sept. 19 that 200,000 Syrian Kurds fleeing ISIS in Kobani crossed the country's border, the Syrian refugee population across the country topped the 2 million mark.

Recalling Lebanon's announcement that it will not accept any more refugees from neighboring Syria except in what authorities deem to be "exceptional" cases such as "humanitarian situations," Davutoğlu said that Turkey will not follow Lebanon's example – referring to the country's decision.