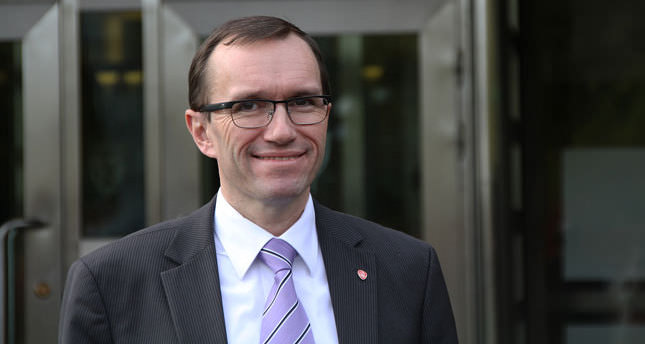 by Daily Sabah Oct 31, 2014 12:00 am
After the Greek Cyprus administration suspended talks on reunifying the divided island on Oct. 7, in response to Turkey's plans to search for oil and gas off the coast of Cyprus, the U.N. has been testing the water between Ankara and Athens to see whether either side is interested in restarting talks in Cyprus. Turkey, however, has given the message that opportunities are running out for a successful peace while insisting on a willingness to find a solution.

As part of the U.N.'s efforts to bring the parties back to the table, the U.N. Secretary General's Special Adviser to Cyprus, Espen Barth Eide, visited Turkey this week to meet with Foreign Minister Mevlüt Çavuşoğlu and Prime Minister Ahmet Davutoğlu. According to diplomatic sources during the meeting between Special Adviser Eide, Foreign Minister Mevlüt Çavuşoğlu warned the U.N. official that it would be the last opportunity to find a solution for the Cyprus problem while reiterated Turkey's insistence on a solution for the island. Sources also claim that Foreign Minister Çavuşoğlu stressed in the meeting that this last opportunity should not be missed. "We are supporting the negotiations. This last opportunity should not be missed." Çavuşoğlu also said to Special Advisor Eide.