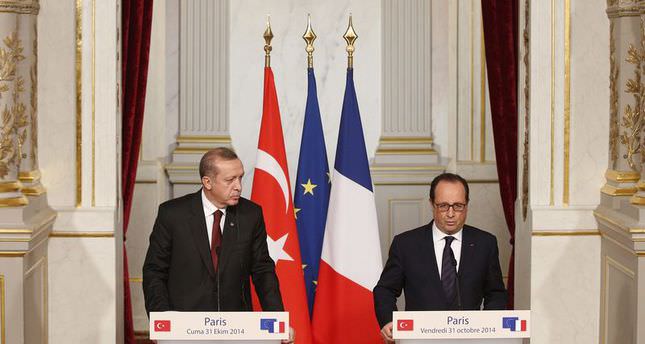 President Erdoğan, on his visit to Paris, receives full backing from his French counterpart on the setting up of a safe zone, no-fly zone and aid to the FSA

President Recep Tayyip Erdoğan echoed Friday that Turkey's conditions for taking a more active role in the anti-ISIS coalition are a safe zone for Syrian refugees in Turkey, a no-fly zone along the country's borders and the training and equipping of the moderate Syrian oppositions. Paying a one-day visit to France to hold talks with his counterpart, France's President François Hollande, the Turkish president stated that Turkey and France have the same outlook with regard to the chaos in Iraq and Syria. France is the second leading actor in the U.S.-led anti-ISIS coalition, and it has carried out airstrikes against the Islamic State of Iraq and al-Sham (ISIS) and reconnaissance flights over Iraq to reinforce U.S. forces. The country is also the first to show its support for Turkey's safe zone and no-fly zone demands from the anti-ISIS coalition to protect Syrian refugees fleeing the region to Turkey. In a news conference held after a tête-à-tête meeting between the presidents, Erdoğan pointed to Turkey's proximity to Iraq and Syria and noted that Turkey has a 1,295-kilometer border with these two troubled countries.

Highlighting that ISIS has captured 40 percent of Iraq since the beginning of its advance, Erdoğan questioned why the besieged northern town of Kobani in Syria is at the forefront, as there are numerous other cities in the hands of ISIS.

"Why is there no action or intervention against the ISIS advance in these cities, but Kobani? The city is located on Turkey's border, and there are no civilians in Kobani now, and 200,000 Kobani people are guests in our country [Turkey], and we look after them [those fleeing Kobani]. There are only 2,000 fighters in Kobani; it is difficult to understand this approach. Why has the coalition not taken action in other zones?" questioned the president, complaining about Western coalition members focusing solely on the besieged northern town.

"Why continuously bombard this town of Kobani? Why not other towns like Idlib?" asked Erdoğan.

Speaking in the news conference, Hollande stated that France supported Turkey's three demands and believed Turkey's demands for a safe zone, no-fly zone and equipment should be supported.

Backing Erdoğan's criticism as to why the other captured cities did not draw as much attention as Kobani, the French president said, "we are aware that the tragedy is not in Kobani alone, but also in other key cities such as Aleppo and Sham, but Turkey has our full support on the necessary steps that should be taken."

Hollande indicated the possibility of a long-term partnership between ISIS and the Bashar Assad regime and pointed that ISIS is not the only enemy in the region; the Assad regime is no lesser of an enemy.

Criticizing Western countries for not taking precautions against the Syrian regime and Bashar Assad, Erdoğan stated that Turkey was left alone in its firm stance against the regime.

Mentioning the Assad regime's systematic killings of thousands of Syrian people, Erdoğan pointed to Western countries' concerns over Assad's fall from power and said, "A mentality asking what is going to happen when Assad leaves is not able to cope with ISIS."

The conflict began as a peaceful revolt demanding political change, but later morphed into a brutal civil war after Damascus unleashed a countrywide crackdown against dissent. Denouncing the humanitarian crisis in the region, Turkey opposes the Assad regime.

Dismissing allegations by some international media outlets that Turkey supports ISIS in the region, Erdoğan said these remarks are a serious injustice against Turkey by noting that Turkey has never supported terrorist activities and opened its borders to more than 1.5 million refugees fleeing Iraq and Syria. The Turkish president also called for media outlets and columnists to be fair, while evaluating Turkey's stance toward the regional crisis reaching its borders.

In a conference held in Paris late Friday, Erdoğan said, "some of the weapons the U.S. sent fell into ISIS's hands. ISIS then took control of 40 percent of Iraqi soil. I fail to comprehend this."