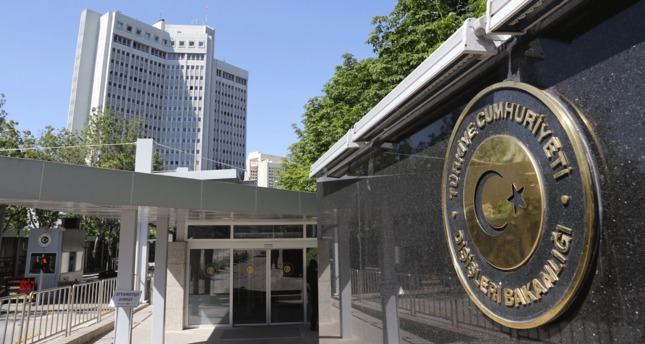 by AA
Nov 01, 2014 12:00 am
Turkey has demanded explanation from Danish officials about the release of 10 men charged with financing the outlawed Kurdistan Workers' Party, or PKK, for alleged terrorist operations, said the Turkish Foreign Ministry.

On October 22, a Danish court, freed 10 men, who were charged with financing the outlawed Kurdistan Workers' Party, or PKK, for alleged terrorist operations.

Turkey's Foreign Ministry released a statement on Friday, saying an explanation had been demanded from Danish officials.

"Fighting the financing of terrorism is an international obligation for Denmark, as well as every country. Therefore, it has been demanded from Danish officials an explanatory information about precautions taken against terrorism financing, including the case history," said the statement.

The 10 suspects were accused of channeling about 140 million kroners, or $21 million, to the Kurdistan Workers' Party through the Roj TV network, a Kurdish satellite television station.

The prosecutors in Denmark were unable to prove the defendants had known their financial contributions to the Roj TV station would indirectly support the outlawed party, the Copenhagen City Court said.

The prosecutors now have two weeks to appeal the decision.

In July last year, a Danish court had canceled the network's broadcasting license, a decision hailed by the Turkish Foreign Ministry. The court also rejected the network's appeal last February.

The PKK is on the terrorist lists of Turkey, U.S. and the EU.

Turkey has launched what is publicly known as the "solution process" to end more than three decades of fighting with the Kurdistan Workers' Party, which has claimed more than 40,000 lives.