Turkey repeats call for expert help to analyze events of 1915 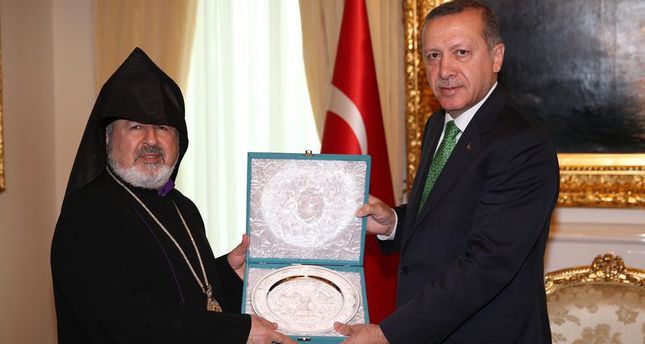 Ahead the 1915 centennial, both Turkish-Armenian communities as well as the government maintains hopes that Armenia will assist improving ties by letting experts decide on the tragic events that happened a century ago

As the centennial of the 1915 events approaches, the Armenian diaspora stepped up its efforts to convince the world to label the incidents as "genocide" despite serious opposition from Turkey. On the other hand, Turkey increases efforts to improve relations with Armenia while it reiterates that the issue should be analyzed by historians, geologists and other experts.

Turkish-Armenian relations have remained strained for decades due to Armenia's constant demand for Turkey to officially accept the Armenian claims of "genocide." Tensions peaked in 1993 when Turkey closed its borders with Armenia in reaction to the war in Nagarno-Karabakh and in support of its close ally Azerbaijan.

Nevertheless, earlier this year, President Recep Tayyip Erdoğan made attempts to thaw the tensions between the two countries by issuing a message ahead of the 99th anniversary of the 1915 incidents. In an unprecedented move, then prime minister Erdoğan extended condolences to the grandchildren of the Armenians who lost their lives in the 1915 events.

Both Armenian society and international circles have hailed the message, which read, "It is a duty of humanity to acknowledge that Armenians remember the suffering experienced in that period, just like every other citizen of the Ottoman Empire."

Speaking to Daily Sabah, Turkish Armenian intellectual Markar Esayan suggested that there are various ways to enhance ties between the two countries, but patience is needed for the ultimate resolution to be reached since the issue has become increasingly complex following 100 years of apathy. He suggests that there are two "channels" for Turkey to reach a resolution, one being the official (governmental) channel, and the other the civilian channel.

The matter is less likely to be tackled lightly in the official channel, Esayan claims, as the matter has become "over-politicized," both in Armenia and within international circles.

"Erdoğan's message was a significant step towards easing the matter, but it is far from satisfactory in the official platform. Nevertheless, he has won the appreciation of civilian society, which should not be overlooked."

Esayan suggests that Erdoğan's move has resulted in relief within Armenian society and, if repeated, could extend to the official channel as well. Erdoğan's attempt to heal relations between both countries was preceded by Abdullah Gül's visit to Armenia during his presidency. Gül attended the 2010 FIFA World Cup qualifier match in Armenia upon Sargsyan's invitation in 2008, which was followed by Sargsyan's reciprocal visit to Turkey to watch the return game the following year.

In addition, during this period of football diplomacy, the two countries' then foreign ministers, Ahmet Davutoğlu and Eduard Nalbandyan, signed protocols to establish diplomatic ties between their respective countries in 2009 in Switzerland. Mediated by the U.S., the protocol had presupposed the opening of the border between Turkey and Armenia. However, the process ended before the Armenian National Assembly approved the protocol conditions. Although these attempts deserve credit for normalizing ties between the two countries, this progress is now obscuring the lack of agreement over the term "genocide."

Turkey, the successor state of the Ottoman Empire, denies that the word genocide is an accurate term for the 1915 incidents. Turkey argues that genocide did not occur, asserting that the death toll has been inflated, ethnic violence also killed Turks and the Ottoman government did not "intend" to exterminate Armenians while relocating them. Esayan notes that since the current ruling party does not see itself as the successor to the Committee of Union and Progress, whose leadership is claimed to be responsible for the alleged killings, it can act more confidently in expressing thoughts on the events of 1915 compared to previous Turkish governments.

"The ruling party considers the committee and its successors as 'Kemalists,' who deviated from the Ottoman's multicultural nature because their mentality allowed the violation of religious people and minorities' rights. Religious people and Armenians are equivalent in this scenario," Esayan said.

Etyen Mahçupyan, an Armenian intellectual and journalist, told Daily Sabah that clear definition of the incident can solve the crisis. He suggests that the parties could agree to a milder definition of the term instead of the one determined by the United Nations General Assembly on Dec. 9, 1948.

Davutoğlu, the current prime minister, previously expressed discontent over the definition of genocide, suggesting that he could not accept genocide claims if the ancestors' genocide is stigmatized alongside the Holocaust, as one of the two major massacres of the 20th century.

"Genocide is a term that sounds different to both countries. If the two countries pledge a common and more general definition of genocide instead of singularizing it, density will be lifted from the word, which eventually will lead to relief on the part of both countries," Mahçupyan said. He even suggested a joint declaration be issued in which Turkey accepts the large number of deaths that took place in 1915, and Armenia, in a forgiving tone, admits that such massacres have always taken place in the history of people of every religion.

Another issue that would come as a relief to Armenian society will be compensation for the losses. Officially accepting the incidents as genocide would mean having to pay a large amount of compensation to the relatives of the victims under international law.

Mahçupyan thinks compensation should address Armenian heritage instead of individuals. "The souls of the Armenian people would be healed if a great deal of the heritage is preserved by the Turkish government, be it under the name of compensation or solely as a move to repair ties with the Armenian people. If the government funds the restoration, reconstruction and brings into use Armenian cultural heritage, which dates back to the early ages of the Ottoman Empire, relations between the two countries will undoubtedly be strengthened," Mahçupyan said.

Meanwhile, Archbishop Aram Ateşyan, the deputy patriarch of the Armenian Patriarchate based in Istanbul, politely refused to deliver an opinion to Daily Sabah, while noting that he hoped the wounds will be healed. "Much to my regret, I must inform you that neither the patriarchate nor the related foundations make comments on the 1915 incidents. I express sorrow on not being able to lend assistance," he said in a statement.