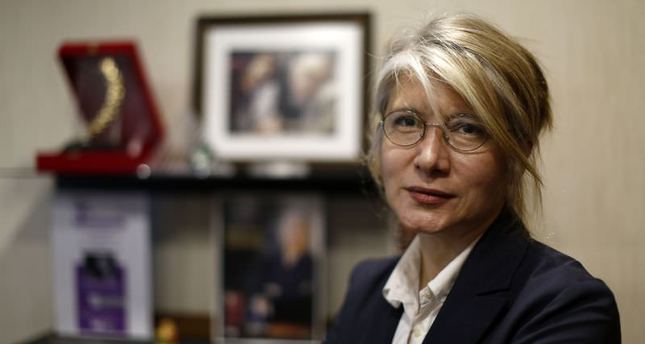 by daily sabah
Nov 03, 2014 12:00 am
A few days after opposition Republican People's Party (CHP) deputy Emine Ülker Tarhan resigned from her party, accusing its leadership of petty conflicts and failure to provide a legitimate alternative to the ruling Justice and Development Party (AK Party), some senior members are calling for her return. CHP Secretary-General Gürsel Tekin, speaking at the party gathering in the southern province of Antalya, asked her to reconsider her resignation. Tekin said that Tarhan's resignation is a "loss" for the CHP. He said, "Resignation is a unilateral decision. I wish she would reconsider it."

Even though Tekin kept a softer tone not to push other neo-nationalist party members to follow Tarhan, CHP Chairman Kemal Kılıçdaroğlu and some CHP members criticized her resignation saying, "This is not an issue that has come up only recently. The paths [of the CHP and Tarhan] have already been parted."

Explaining that he does not intend on getting involved in "unnecessary" debate, Kılıçdaroğlu said that Tarhan has already drawn her own road map.

Tarhan occupied the party's agenda with her dissident discourse against Kılıçdaroğlu during the last presidential election on Aug. 10 and extraordinary party congress to elect the party leader in early September. The question has arisen over new resignations from the neo-nationalist members within the party who might follow Tarhan.

According to sources, Tarhan may establish a new party and resignations from the CHP will follow her to take part in the party that may be established. CHP Deputy Chairman Akif Hamzaçebi dismissed "new party allegations," by saying, "Some media outlets alleged that those who left the party may form a new party. This is not going to happen." Asserting that there is no possibility of establishing a new party, Hamzaçebi said that the CHP decided to come to power in the 2015 national elections and drew a road map to achieve this aim in its Antalya meeting.

Tarhan on Friday released a bitter press statement regarding her resignation in which she blamed the CHP's administration for their "wrong and weak policies," which she claimed are not representative of the people's sentiments and were not made with winning elections in mind. Tarhan's statement reads, "I resign from the CHP after the extraordinary party assembly turned into a competition to gain seats and the disregarding of my call to draw a serious road map, not learning from mistakes made in the presidential elections [on Aug. 10]." She further asserted that the CHP made irresponsible calls during a critical period that saw terrorist activities shake Turkey and that the party had vague policies and incoherent discourses concerning the Oct. 2 mandate. Tarhan's accusation against the CHP were hailed by Prime Minister Ahmet Davutoğlu as he noted that CHP's irresponsible calls in a critical period and vague policies are 100 percent correct.

Necati Yılmaz, the CHP's Ankara provincial chairman, issued a statement over Tarhan's resignation letter and accused her of prompting Davutoğlu with her statements. Yılmaz stated that the timing of the resignation is peculiar and said that Tarhan's statement is to change the country's agenda in such a critical period.

In the Aug. 10 presidential election, Tarhan's name was allegedly among those who would be mentioned for presidential candidacy, but these claims were dismissed by both her and the CHP. Following the CHP's loss in the presidential election, the 18th extraordinary party congress gathered to elect the party leader in a response to the harsh criticism of intra-party oppositions within the CHP. It was also asserted that Tarhan would announce her candidacy for party leadership to compete with Kılıçdaroğlu, but these allegations went for nothing when CHP Vice Chairman Muharrem İnce announced his candidacy to run the main opposition first.