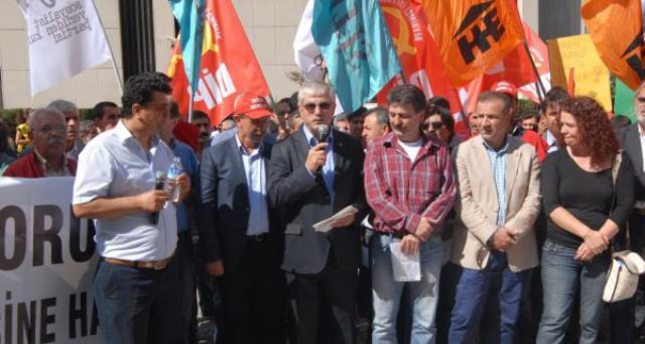 by Daily Sabah with Agencies Nov 03, 2014 12:00 am
The global demonstration to express solidarity with and support for Kobani – a Syrian Kurdish town besieged by ISIS militants – that was set for Nov. 1 was held peacefully amid fears that Turkey might face more violent street protests like those that claimed dozens of lives in early October.

The demonstrations, which had similar motives to the earlier protests, ended without any of the feared trouble. Turkish officials were worried that the global demonstrations would result in vandalism and aggression by the protesters like in the previous protests, but it did not happen. Groups of people gathered for the rally in Diyarbakir's Baglar district, along with the local HDP officials.

The group marched through İstasyon Square with HDP Deputy Nursel Aydoğan and Democratic Regions Party district head Zübeyde Zümrüt. Security forces were parked on corners with armored vehicles and took extra measures to ensure protesters did not violate their specified route. Earlier on Wednesday, the HDP issued a call for a global demonstration in support of Kobani, the Syrian border town currently under siege by ISIS. This latest call follows a similar one issued by the same party earlier this month, which triggered nationwide demonstrations and clashes across Turkey that left at least 38 people and two police officers dead. The fatal clashes also caused financial damage in several provinces where government buildings, vehicles and Red Crescent vans were set ablaze. Commeting on the HDP's first call for street protest that happened on Oct. 6-7, Deputy Prime Minister Beşir Atalay said that the HDP took a major blow from the protests and asserted that the party is working to minimize the adverse effect of the call now.