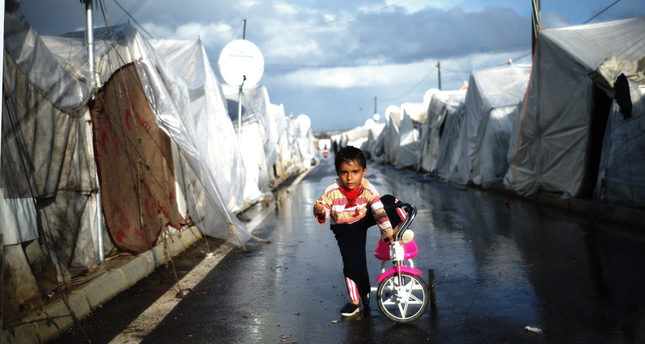 Turkey spent $4.5 billion for refugees from Syria and Iraq while the rest of the world combined to send $200 million, said Erdoğan, criticizing the U.N. and the West's lack of compassion

President Recep Tayyip Erdoğan in an opening ceremony on Sunday said that Turkey takes cautious steps regarding the chaos in the region triggered by the Islamic State of Iraq and al-Sham (ISIS) as part of its efforts to help halt the ISIS siege in the north Syrian Kurdish town of Kobani. Calling on the U.N. to take action regarding the refugee crisis in Syria, the president said that Turkey does its share to relieve the humanitarian burden in the region. "There are currently 1.6 million [Syrian] refugees in Turkey. We have spent $4.5 billion [on the refugees]. While we are establishing tent cities - temporary refugee camps - the support from around the world amounts to $200 million," Erdoğan said, criticizing the U.N. and Western countries for turning a blind eye to the refugee crisis. Questioning why Kobani is taking the forefront while there are other provinces in Iraq and Syria under ISIS control, Erdoğan said, "Why did they not care about Hama, why did they not care about Homs? Why Kobani? It is thoughtprovoking indeed."

Erdoğan said that there are no civilians in Kobani and all of the 200,000 residents of Kobani fled and crossed the Turkish border and Turkey opened its borders to all Syrian refugees, with their number currently exceeding 1.5 million.

He criticized the U.S. resupply of Syrian Kurdish fighters through airdrops in Kobani by describing the U.S.'s move as wrong since the arms and aid from the U.S. fell into the hands of ISIS and the PKK's Syrian affiliate the Democratic Union Party (PYD), which was its intended target.

On Saturday, Erdoğan on his way back from Paris responded to questions regarding the current developments in Iraq and Syria, their implications on Turkey and the region and highlighted the necessity to establish a safe zone above the 36th parallel while he criticized the 1916 Sykes-Picot Agreement for its shortcomings that he claimed had direct implications to the current problems in the Middle East. Erdoğan said that he had spoken with President François Hollande of France and stated that Turkey and France have a very similar stance on the Free Syrian Army (FSA). "France supports our proposal, which anticipates the establishment of a no-fly zone, a safe zone and providing FSA fighters with training and equipment," Erdoğan said, and explaining that the current situation in Syria is alarming and moderate FSA forces may provide a viable solution to the ongoing conflict in the region. He said that there is a serious amount of disinformation about Kobani. For instance, he explained that the Kurdistan Regional Government (KRG) initially proposed to send 2,000 peshmerga fighters to fight in Kobani but the number was reduced to 500, which was rejected by the Syrian-Kurdish People's Protection Units (YPG). "This number was then reduced to 90, but the YPG also opposed this," Erdoğan said, claiming that the YPG demanded that peshmerga forces hand them arms and go back to Northern Iraq in efforts to ensure that the YPG will gain sole control of Kobani from ISIS. "Turkey is the country that is under direct threat by the ongoing conflict in the region," Erdoğan said, and specified that a U.N. Security Council resolution or a NATO resolution would be necessary to establish a no-fly zone and a safe zone in the region. Touching upon the fact that there are over 1.6 million refugees in Turkey, he said that the establishment of a safe zone over the 36th parallel, which coincides with the region between Turkey, Iraq and Syria, would benefit civilians. Erdoğan said that he will use the acronym from ad-Dawlah al-Islamiya fil-Iraq wa ash-Sham – Daesh – to refer to ISIS, which is the Arabic version of the many acronyms for ISIS, as it was used in France as a state policy following a campaign started by French Foriegn Minister Laurent Fabius. Daesh is used to differentiate Islam and terror, according to Erdoğan. Daesh is the Arabic for the Islamic State of Iraq and al-Sham. The name is commonly used by enemies of ISIS and it also has many negative connotations as daish sounds similar to the Arabic words "daes," – one who crushes something underfoot – and "dahes" – one who sows discord.