Deputy PM says a terrorist leader cannot be his addressee 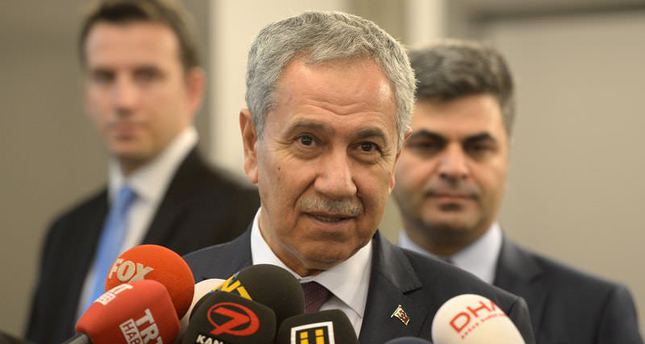 by Daily Sabah Nov 04, 2014 12:00 am
Turkish Deputy Prime Minister Bülent Arınç refused to respond to a statement delivered by Cemil Bayık, a founding member of the Kurdish Communities Union (KCK), during a cabinet meeting Monday night. Speaking to media after the meeting, Arınç explained that a terrorist leader cannot address him.

In a comment in an Austrian newspaper on Monday, Bayık, who is one of the founding members of the KCK – an umbrella organization of the outlawed PKK – was quoted as saying that the PKK is suggesting a third power to observe the process, possibly the U.S. or an international delegation.

"We need a go-between, we need observers. We would also accept the Americans. From our view it is moving towards this direction," he added.
When asked how he would respond to Bayık's statement, Arınç rejected making any comments, saying he did not deem Bayık as a legitimate addressee.

"When I was reading through the newspaper, I came across a sentence that read 'the leader of a terrorist organization, Cemil Bayık, said this and that.' It is impossible to expect me, as the deputy prime minister, to respond to a statement delivered by a leader of a terrorist organization. Whatever such a person says, he is not my addressee. If I ever feel obliged to respond to such a statement from such a person, it would be a pity for the Turkish Republic," Arınç said.

Arınç also touched upon the significance of the continuation of the reconciliation process, saying the government has launched a project for preserving unity and brotherhood in the country.

Arınç also warned that, counting on the project, the Kurdish radicals should not feel free to get involved in vandalism and aggression.
"Our National Unity and Brotherhood Project could only expand if people [in eastern Turkey] refrain from terrorism and disorder. We show patience over the continuation of our project. We will carry out diligent work until the end and try to do our best. But putting on a show, insulting and threatening, is not our job, and nor is supporting illegal organizations." Arınç further added.