Panelists point to developing cooperation between Turkey and Ukraine 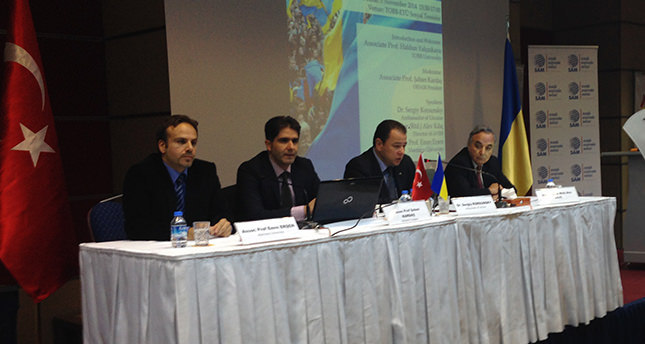 by Fatih Şemsettin Işık
Nov 04, 2014 12:00 am
A conference entitled "Regional Security and Cooperation Perspectives in the Black Sea in the aftermath of Recent Developments in Ukraine" took place on 03 November 2014 in Ankara. It was coordinated by the Center for Strategic Research (SAM), the Center for Middle Eastern Strategic Studies (ORSAM) and the TOBB University of Economics & Technology (ETU).

While the goal of the panel was to discuss and assess the latest developments in Ukraine, the rising cooperation in Turkish-Ukrainian relations was also touched upon, with the participation of Ukraine Ambassador for Turkey Sergiy Korsunsky, retired Ambassador and Director of Center for Eurasian Studies (AVİM) Alev Kılıç and Associate Professor Emre Erşen from Marmara University. The panel was moderated by ORSAM President, Associate Professor Şaban Kardaş.

Turkish-Ukrainian relations have experienced raising momentum in the past few years, and, following the establishment of the High-Level Strategic Council in 2011, the two countries have promoted their relations to that of 'strategic partnership'. Since the Ukrainian crisis began this year, Turkey has taken sides with Ukraine by indicating that Ukrainian sovereignty and territorial integrity must be considered. Turkey has not recognized the annexation of Crimea, where 280,000 Crimean Tatars live and have relatives in Turkey.

Regarding Crimean Tatars issue, Ambassador Sergiy Korsunsky stressed Turkey's role in the solution of the annexation, and underlined the fact that Turkey is among those countries which sees the annexation as prohibited by international law. "There are two countries which will never forget the Crimea. Ukraine is the first one and Turkey is the other one," he stated.

Mr.Korsunsky also pointed out that Russia's main purpose in theUkrainian crisis is not confined to undermining Ukraine alone. "Russia wants to turn the annexed territory into a huge military base. But Ukraine is too small for that. Rather, Russia wants to create leverage against NATO and also pursue the control of the entire Black Sea." he said.

In addition, Alev Kılıç reminded listeners that world politics is gradually shifting towards the East, and that Turkey is becoming a more attractive country than it was a few decades ago. "Turkey has a central position in world politics now, and it is no longer mentioned as an EU periphery country." he said.

Kılıç also reiterated the fact that, no matter what Russia plans to do in the Black Sea and the region, there would be a limit "so long as the Montreaux Convention is applied."

While paying attention to the 'strategic partnership' between Turkey and Ukraine, which is grounded within raising cooperation in economy, tourism and security, Emre Erşen reminded listeners of the fact that, in Ukraine, Turkey does not want to face another post-Soviet territorial crisis like in Nagorno-Karabakh. He also stated that Russia has a rising influence on the Middle East, which has been particularly obvious in Syria, and added that there are claims suggesting that Russia will find increasing courage in Ukraine as a result of the policies of Western countries.
Since the cease-fire agreement signed in September, the continuation of fierce clashes in the embattled east proves the volatility of the peace talks. The conflict in eastern Ukraine has left many people in deteriorating humanitarian conditions as some armed groups continue to terrorize civilians' lives in areas where the conflict has been continuing.