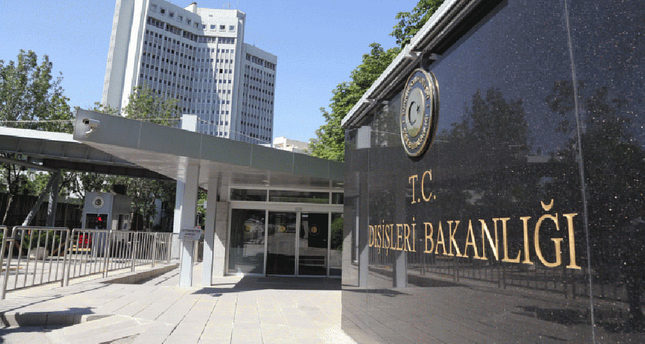 Turkey has summoned Germany's Ambassador in outrage over a caricature referring to President Recep Tayyip Erdoğan and Germany's Turkish community, which has been published in a German school textbook, diplomatic sources said on Monday.

The caricature, which was originally published in November 2011 in the German daily Frankfurter Allgemeine, has now been re-published in a textbook used in schools in the southwestern German state of Baden-Württemberg.

The Turkish officials have demanded an end to this kind of publication, and warned German officials to be sensitive about the issue.

In a statement, the Turkish Foreign Ministry said: "The publication of this caricature in textbooks is a reflection of the racism and xenophobia which is unfortunately on the rise in Germany.

"Such an attempt, which does not only breach personal rights, but also triggers social hatred, xenophobia and Islamophobia under the guise of freedom, has no place in democracy," the ministry said.

"Such practices constitute the real reason behind the failure of the German integration policy due to the feeling of alienation it promotes among Turkish and Muslim communities in the country," the ministry stated.

The caricature depicts a Turkish restaurant owner speaking to his patrons in broken German, with the caption "Turks in Germany for 50 years: a success story."

The drawing also shows a doghouse in the background with the word 'Erdoğan' written on it.