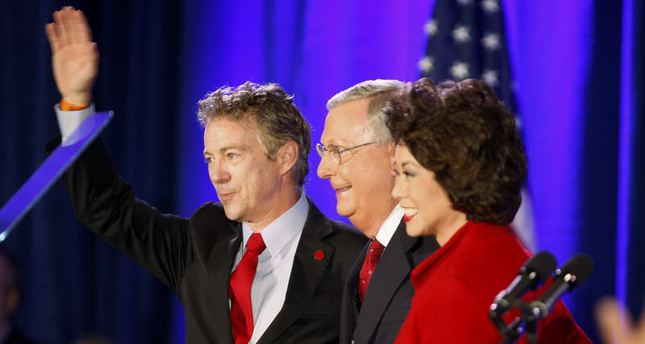 by Ragıp Soylu Nov 05, 2014 12:00 am
The Republican party got everything it wanted from Tuesday's election and the majority of the Senate now consists of red state senators. By gaining seven new seats the GOP can now block any presidential nomination from ambassadors to surgeon general and try to overhaul Obamacare - President Obama does still hold veto power, although use of it may make him look like an obstructionist. Apart from its echoes related to usual domestic political matters, a Republican victory means opportunities for Turkey's foreign policy and the region's unsolved problems under American leadership over the last six years. Republicans, who are famously known for their pro-active approach to crisis solving in the Middle East can help Turkey carve out a proper strategy against the Islamic State of Iraq and al-Sham (ISIS) and the Bashar Assad regime in Syria. "Republicans will force the Obama administration to implement clearer and stronger foreign policy," Dr. Kadir Üstün, research director at the SETA Foundation in Washington said. "Senators like John McCain will increase their role in Syria. Those senators who are usually called 'hawks' think likewise with Turkey on topics such as Assad's future, creating a secure zone, carrying out a no-fly zone and training the Free Syrian Army. In addition to this, they believe without American soldiers on the ground, air operations will be inefficient against ISIS."

However, predicting the Republican strategy might be tricky. Some GOP members defended the notion of keeping out of military operations in the Middle East to cut spending and create a smaller federal state. Barış Ornarlı, a representative of the Turkish Industry and Business Association in Washington (TÜSİAD), believes that conservative voices in the U.S. capital are bothered by Turkey's recent foreign policy moves and a Republican Senate might take an anti-Turkey stand on some issues. "However, leading Senators defend a more engaging and aggressive approach in Syria. They think like Turkey that there must be more comprehensive strategy regarding ISIS."

Some changes within the Senate will help Turkey's distasteful experiences with Congress. For example, Democratic Senator Robert Menendez, who is well-known for his anti-Turkish stance, will hand over chairmanship of the Committee on Foreign Affairs to a Republican colleague.

Menendez last April passed a resolution from the committee accusing the Ottoman Empire of committing genocide against Armenians in 1915 and calling on Turkey to recognize it. A Turkish diplomat said that such a move was "very unexpected." It was the first initiative the Senate ever tried passing on the issue. Menendez's removal from this post will help Turkey's uncomfortable and weak position in the Senate.

Republicans also kept control of the House of Representatives, which is more good news for Turkey as House Speaker John Boehner has already promised to not bring up the Armenian issue to the executive agenda of the chamber. "Congress won't get involved in this issue. We don't write history, we are not historians," he reportedly said during his visit to Ankara in April 2014. However, Ornarlı claims that, despite Boehner's resistance, the significance of 2015 being the 100th anniversary of the Armenian atrocities could push a draft bill further up the agenda. Dr. Üstün said, "It is very hard to foresee what will happen over the next year. But Boehner's existence is a big advantage."