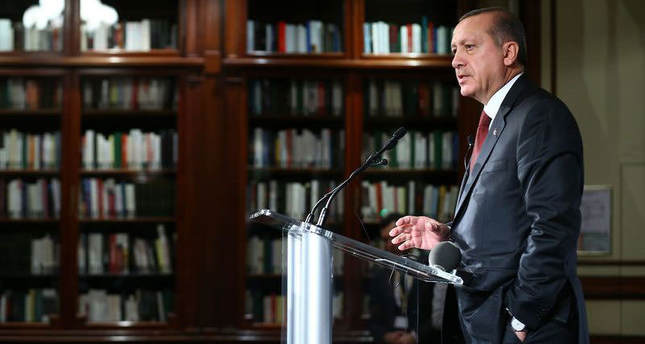 President Recep Tayyip Erdoğan on Thursday urged Israel to stop its aggression toward Palestinians and added that Jerusalem's Al-Aqsa Mosque is the mutual concern of all Muslims. Israel's "barbaric and vicious" actions cannot be tolerated, he added.

Before his departure for Turkmenistan on Thursday afternoon, Erdoğan spoke to members of the press, saying that whenever international eyes are focused elsewhere, Israel increases its aggression against the people in occupied Palestine.

Erdoğan said that Israel's violation of Al-Aqsa Mosque and Jerusalem must stop in order for peace in the region to be sustained. He made the comments during a phone conversation held with Palestinian President Mahmoud Abbas and the political leader of Hamas, Khaled Mashal, on Wednesday night, according to presidential sources. Erdoğan added that Turkey will take the necessary initiatives to the U.N. Security Council.

The head of the Directorate of Religious Affairs, Mehmet Görmez, also condemned Israeli aggression on Thursday saying that "it is necessary to avoid any act that may raise trauma in the region."

Görmez, during a visit by U.S. ambassador to Ankara, John Bass, said, "The closure of Al-Aqsa Mosque to Muslims for the first time since the 60s may result in serious abuses in our region which already suffers from many traumas. It is necessary to avoid any act that may raise trauma in the region."

On Tuesday, Prime Minister Ahmet Davutoğlu also called on all Muslims to protect Al-Aqsa Mosque, saying Jerusalem could not be "monopolized by a single religion."

A group of Israeli security forces and a number of Jewish settlers stormed the mosque compound on Wednesday, according to Palestinian officials.

A Palestinian guard at the complex said Israeli security forces stormed the compound's courtyards through the Magharbeh and al-Silsila gates and began shooting randomly at the worshippers and religious students, leaving scores injured.

The violence came as several extremist Jewish groups called for mass intrusions into Al-Aqsa Mosque after the shooting a week ago of a rabbi, Yehuda Glick, who many considered to have extremist views, in Jerusalem by a Palestinian man.

During the attack, heavily armed Israeli security forces entered the mosque with their boots on, knocked around Palestinians protesting their presence and threw around copies of the Quran in the mosque, according to an Anadolu Agency reporter.

Several international reporters and cameramen were also hit by rubber bullets, stun grenades and tear gas used by Israeli security forces against the Palestinians outside the complex.

Many of them, including an AA correspondents, were injured after being physically assaulted by security forces.

For Muslims, Al-Aqsa represents the Islam's third holiest site, while it is the Temple Mount for Jews who believe it it to be the site of two Jewish temples in ancient times.
Last Update: Nov 07, 2014 1:39 am