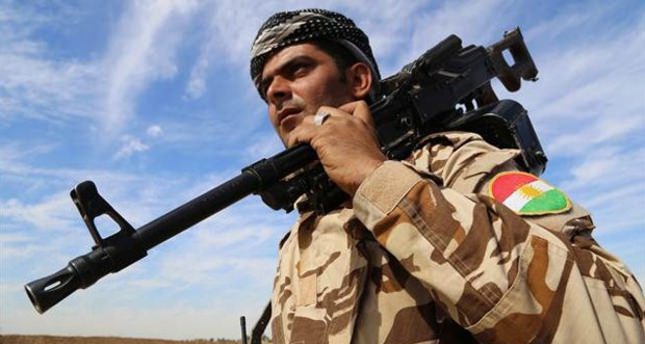 by daily sabah
Nov 07, 2014 12:00 am
A Kurdistan Regional Government's (KRG) peshmerga general, Ahmed Gerdi, who is the commander of the peshmerga unit that went to Kobani, Syria to help fellow Kurds fight the Islamic State of Iraq and al-Sham (ISIS), thanked Turkey for its help in the fight against ISIS militants.

Speaking to pro-Kurdish news channel Rudaw on Friday, Gerdi said, "Turkey helped the peshmerga to get to Kobani. We would like to thank them for allowing our transit to Kobani."

Furthermore, the spokesman for the Democratic Union Party's (PYD) armed the People's Protection Units (YPG), Polat Can, said the YPG is fighting along with Free Syrian Army (FSA) fighters – some of whom crossed into Kobani from Turkey – against ISIS and claimed that 250 YPG militants died in clashes and some 3,000 ISIS militants were killed in the Kobani fight.

In a written statement, KRG President Masoud Barzani recently said that the peshmerga forces' access to Kobani would have been impossible without Turkey's compliance. Barzani spoke after peshmerga soldiers departed last week to fight alongside YPG fighters in Kobani on the Turkey-Syria border to repel the ISIS attack. "Intense bilateral and trilateral talks were held among the U.S., Turkey and the Kurdish region to arrange access for the peshmerga. After the talks, Turkey officially informed us that it would provide all kinds of support," he said.

The battle for control of the strategic Syrian town between ISIS militants and armed Kurdish groups has been raging since mid-September when ISIS entered the town. An estimated 1.5 million Syrian refugees, including some 190,000 from Kobani, are being sheltered in camps throughout Turkey after fleeing the fighting.

Turkey has also strongly supported a proposal before the international community and the U.N. to establish a no-fly zone and a safe zone for refugees inside Syria near the Turkish border.