Pope Francis hopes to unite Christians in his Turkey visit 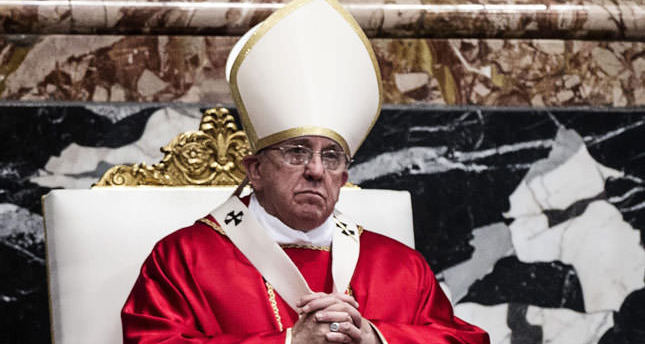 Prior to Pope Francis’s visit to Turkey, the Vatican stated that the pontiff is hoping to build stronger ties between the Catholic and Orthodox Churches in Turkey. The division between the two churches dates back to the Great Schism of 1054

Catholic and Orthodox clergy came together in central Istanbul last month during an important church service to commemorate Saint Francis of Assisi, whose feast day fell on Oct. 4.

The service came ahead of Pope Francis's planned visit to Turkey on Nov. 28-30. The 76-year-old Argentinian pontiff delivered a speech to the Orientale Lumen Foundation last month where he said he wished to "overcome the obstacles that still divide us."

According to the Vatican, the pontiff also said he hoped to build stronger ties between the two churches.

Father Remzi Diril, a newly-ordained priest of the Chaldean Catholic Church in Beyoğlu, described the visit as important for Christian unity.

"We believe it will strengthen relations between the Eastern and Western churches. We don't have any doubt about that," he said.

The division between the Catholic and Orthodox churches dates back to the Great Schism of 1054.

The conflicts between the Eastern and Western churches developed gradually as the Roman Empire fragmented. Although they shared the same faith, the two traditions have remained divided.

"Every church is following its own tradition now. Prayers, confessions and baptisms are all different but differences are our richness, they are not a problem for us," Fr. Diril said.

"For example, Catholics use many icons in their churches but we, as Orthodox do not use icons like them," Kenan Gürdal, the vice president of the Beyoğlu Syriac Church of the Virgin Mary Foundation, said.

"Despite these differences, I don't think we have deep divisions. We, as Christians, are in harmony. We are all following the path of Jesus Christ," Fr. Diril said.

Gürdal agreed: "We wish we all had the same ritual or same doctrine but our way is the same; we are all united in Jesus Christ despite of our differences."

"The Pope's visit to Turkey and his talks with [Orthodox Patriarch] Bartholomew I will be a good message to the world in terms of both Turkey and Christian communities," he added.

Pandeli Laki Vingas, the head of the Minority Foundations charity in Turkey, is also hopeful ahead of the high-profile papal visit. Being Orthodox, Vingas said it will contribute to unity.

"I am sure his visit will not be merely symbolic and will send a message to people who support dialogue among sects and religions," he says.

"For Christian unity, the Vatican has been exerting efforts for many years but it is not easy to unite [all the sects] because there are some people who don't want this unity.

"But the majority of Christians look for unity, not division. Religious leaders should lead toward this unity.

"I am sure these are sincere steps," Vingas added.

Pope Francis will be the fourth pontiff to visit Turkey after Pope Benedict XVI in 2006, Pope John Paul II in 1979 and Pope Paul VI in 1967.

During his three-day visit, the spiritual leader of the world's 1 billion Catholics will meet President Recep Tayyip Erdoğan and Turkey's top Muslim cleric, Mehmet Görmez. The pontiff will hold a High Mass at the Catholic Cathedral of the Holy Spirit in Istanbul and privately meet Istanbul-based Fener Greek Orthodox Patriarch Bartholomew , the spiritual leader of the world's Orthodox churches.

He is also expected to visit the mausoleum of Turkey's founder, Kemal Mustafa Atatürk, in Ankara and visit the Hagia Sofia in Istanbul, which was a former church before being converted into a mosque and then into a museum.

The pontiff will also visit the Sultan Ahmet Mosque, or the Blue Mosque, in Istanbul. His visit will come three days after he addresses the European Parliament in Strasbourg during a difficult time for people of various religions in the Middle East and at a time when Turkey is home to more than 1.5 million Syrian refugees.

The Syrian civil war has left more than 191,000 people dead since it began three-and-a-half years ago, according to a U.N. report released in August.

Iraqi Christians have also fled their homes in fear for their lives in the face of attacks by Islamic State of Iraq and al-Sham (ISIS) militants, with most of them arriving in Turkey.