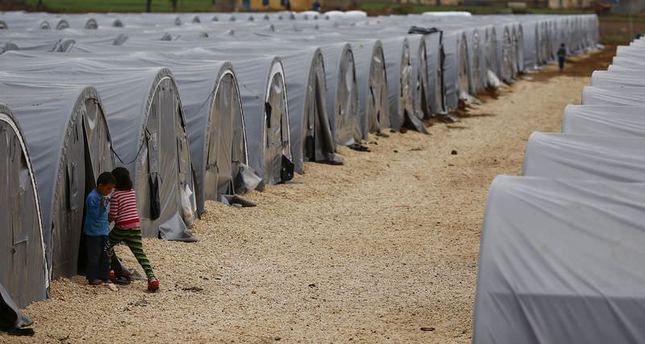 The parliament commission's report covered the number of Syrian refugees, who have entered Turkey in September and October 2014, the number of wounded in Kobani treated in Turkey and the amount of humanitarian aid delivered to the Syrian town. There are 1.627 million refugees hosted in the country, the report said.

At least 190,000 refugees from Syria's Kurdish-populated town of Kobani have fled to Turkey, the report said.

According to the report, conducted by the committee between October 23 and 24, 857 people wounded in Kobani were treated in Turkey and 820 trucks containing humanitarian aid were sent to the town.

There are 223,996 refugees sheltered in refugee camps, the report said.

There are currently five refugee camps in Hatay, four each in Sanliurfa and Gaziantep, two in Kilis and two in Mardin, and one in Kahramanmaras, Osmaniye, Adiyaman, Adana and Malatya.

At least 324,738 Syrians have returned to their country, the report stated.

The Nusaybin refugee camp in southeastern Mardin, which can host up to 13,500 refugees, still has room for Syrians and Iraqis who seek shelter, according to the report.

When they arrive at the camp, the refugees go through a health checkup, are given identification cards and given places in mobile homes.

Security outside of the camp is provided by the Gendarmerie General Command, while a private security company provides protection inside the camp.

Refugees are given money from the World Food Program, and Turkey's Prime Ministry Disaster and Emergency Management Presidency to buy food from markets inside the camp.

Schools are also provided in the camps, Turkish and Syrian volunteer teachers give lessons in both Turkish and Arabic in primary, junior high and high school.

The refugee camps, for which 97 percent of building costs were covered by Turkey, and their residents were in good condition and refugees' needs were met with, the report said.

At least 100,000 deaths have been counted in the Syrian civil war since July 2013. The UN has stopped updating the death toll for the country due to difficulties in verifying casualties.