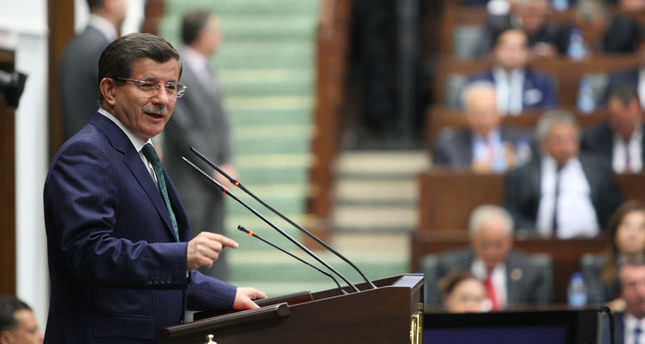 Prime Minister Ahmet Davutoğlu speaking at the Justice and Development Party's (AK Party) weekly group meeting on Tuesday said that Turkey embraces all of its citizens and will not tolerate those who attempt to create turmoil through the exploitation of sectarian differences.

Touching on the Alevi issue, Davutoğlu said that it was only during AK Party rule that Turkey took the issue seriously and started looking for a resolution and that the main opposition Republican People's Party (CHP) was disturbed by the government's initiatives. "The love we have for Rumi in Konya is no different than our love for Hacı Bektaş-ı Veli," Davutoğlu said, adding that the government embraces its Alevi citizens and will do everything to ensure that their culture and traditions are preserved and that those who promote enmity between Alevis and Sunnis are simply ignorant to the fact that the two sects are a part of the same religion. He harshly criticized the CHP for failing to comment on the Dersim massacre that took place in 1937 and resulted in the deaths of over 10,000 people and forced about 12,000 to migrate.

"The AK Party is not afraid to openly voice oppression if someone has committed it," Davutoğlu said, adding that the government sees all of its citizens as human beings and does not check ethnic or religious identity.

Davutoğlu accused opposition leaders Devlet Bahçeli of the Nationalist Movement Party (MHP) and Kemal Kılıçdaroğlu of the CHP for being selective with regard to acknowledging oppression. "[The Bashar] Assad regime represents the Arab Baath, and the Turkish opposition CHP is the Baath [Party] for Turks," he said, criticizing the CHP for turning a blind eye to the oppression of Syrians and supporting the Assad regime in Syria. "We are against the killings in Kobani, just like we were against the massacre in Aleppo." Similarly, he said that he differs with Bahçeli with regard to the acknowledgement of mistakes made by the state in the past. He said, "Bahçeli thinks the protection of harmful policies of the past protects the state," and claimed that the AK Party is not afraid to acknowledge past mistakes and fix them to the best of their ability in efforts to embrace all citizens and address their concerns.

"Anyone who tries to show Alevi and Sunni beliefs to be opposites are historically and culturally ignorant," he said, underscoring that sectarian discrimination will not be tolerated in Turkey.

Davutoğlu said that the Alevi issue in Turkey and the issues of Alevi citizens have not been discussed frankly until the AK Party came into power.

In recent years, the AK Party government has taken numerous steps to respond to the needs of ethnic and religious minorities within Turkey as part of democratization packages. A series of meetings were held with Alevi community leaders and academics to understand and define their issues and find permanent solutions. It is estimated that there are over 10 million Alevi citizens in Turkey, corresponding to around 15 percent of the country's population.

As Ankara prepares to address the grievances of the Alevi community, it has made an important decision regarding the status of Alevi foundations. A ruling was adopted that accepts the Hacı Bektaş Veli Anatolian Cultural Foundation – known to be one of the largest Alevi organizations – as an organization working for the public interest, signaling an unprecedented move hailed by Alevi leaders, which is expected to have a positive impact on the official status of Alevi organizations and foundations.