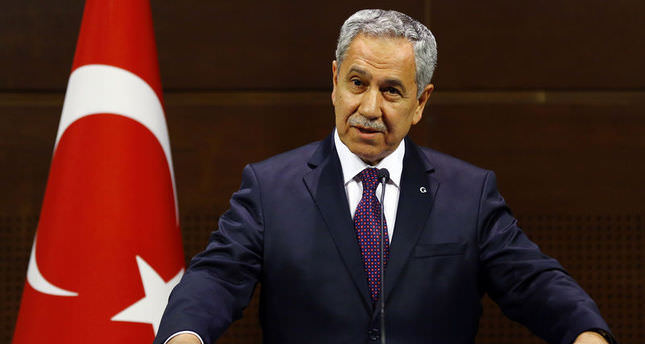 by daily sabah
Nov 11, 2014 12:00 am
Turkey has made clear that it will not pursue peace talks that have been ongoing since 2012 with People's Democratic Party (HDP), unless the latter convinces the government of its sincerity in the process.

The government has revealed its solid stance over the matter and stipulated that HDP must refrain from provocative acts that might impair public order for resumption in the process.

Speaking after the cabinet meeting on Tuesday, deputy prime Minister Bülent Arınç told the People's Democratic Party (HDP) to stop shuttling between The PKK's Kandil factions and its leader Abdullah Öcalan, and instead to draw their own roadmap to the settlement.

The PKK's Kandil factions and its leader Abdullah Öcalan have a perceived disagreement over the ongoing peace process. Kandil's lack of response to the ongoing process, which has garnered support from both the East and Southeastern regions of the country, stands as a significant hurdle for the PKK leader. HDP, on the other hand, is on the edge of souring the already tense relations between the government and the Kurds, with provocations which are further impairing the process.

Arınç considers that the current limbo which the HDP is stuck in arises from the party's lack of firm stance over the process. He touched upon various issues during his statement, including the reconciliation process, which is fragile at the moment owing to recent developments facing Turkey.

The settlement, which was expected to reach a conclusion by February, was crippled after the deadly protests of September 6 and 7, which claimed dozens of lives. The fighting in and around Kobani prompted Kurdish radicals in southeast Turkey to stage protests that were supportive of the Kurds fighting against ISIS in Kobani. The radicals, who were complaining about the reluctance of the government to give support to PYD, were engaged in violence and aggression during the protests. The protests were further exacerbated when the HDP, putting the ongoing peace talks on side, called on its supporters to pour on to the streets, thus further impeding the reconciliation process, which was launched in 2012.

Amid these developments, government officials suspended the talks and stated the requirement for solid steps from HDP to continue with the talks. Davutoğlu, speaking at his party's parliamentary group meeting, stated that HDP should openly express its opposition to violence and vandalism.

Arınç also called on HDP to adopt its role concerning the process 'with courage'. He told the members of the party to avoid being caught up in the disagreement between Kandil factions and the PKK leader Öcalan and make their own decisions instead as an independent political party.

Stressing that the process is still ongoing and that the government does not want to walk out of the door, he said the real question should concern what HDP will do, and whether they are sincere in pursuing the process.

Alluding to HDP's demand from the government to meet with Öcalan imprisoned in İmralı Island, Arınç said: "what do they expect from us, after finding no harm in supporting violence and vandalism during the pro-Kobani protests, indicated when they called on the protesters to take to streets? We consider it is beneficial to address the political extension of [PKK] during the process, but they should also do their part to this end."
According to media sources, although the ruling party has not yet accepted the official application of HDP members to pay a visit to İmralı, the government officials are carrying out talks with Öcalan to reach negotiations over the latest developments. The talks will reportedly be shaped taking into account HDP's approach towards acts aiming to destroy the public order.

Since the main condition is armistice, the expectations from the government to carry out talks also include putting an end to provocative acts, threats and violence. The government is determined not to accept HDP as an addressee in the peace talks unless these requirements are applied.

HDP is also expected to announce that arms have been laid down and that Turkey won't be subjected to armed attacks, in order to return to the normal stage regarding the reconciliation process.

Arınç, in a question and answer session, also stated that there are members from HDP that are genuinely pursuing the process and seek peace in the country. Noting that he knows them by name, Arınç asked for their involvement in the process.

"I know they sincerely support the process and we want to hold talks with them" Arınç was quoted as saying before he stated the process will continue as long as both sides agree on peace.