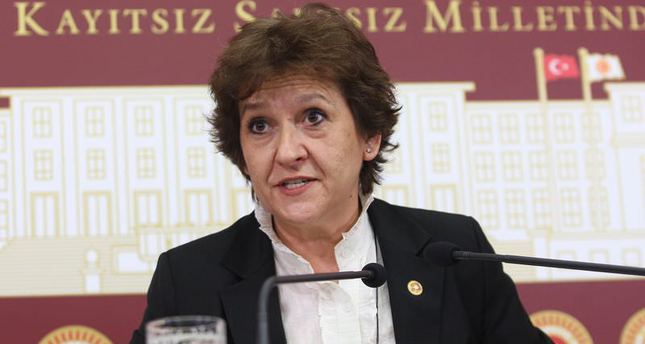 by Daily Sabah Nov 13, 2014 12:00 am
The latest in a series of dissenting voices within the Turkey's main opposition Republican People's Party (CHP) has come from İzmir deputy Birgül Ayman Güler, as she recently made a call on Central Executive Board (MYK) members and its leader Kemal Kılıçdaraoğlu to step down, heating the already tense atmosphere in the party, which first publicly emerged following the controversial resignation of Emine Ülker Tarhan.

CHP deputy Güler, in perceived support for the argument which Emine Ülker Tarhan presented as the basis of her resignation, said the head and the members of the MYK should resign and open the way for new members. Similar to Tarhan's opinion over party's policies, she asserted that principles and democracy within the party are currently suspended.

Her statement comes two weeks after Emine Ülker Tarhan announced her resignation from CHP in a bitter press statement which read : "I resign from the CHP after the extraordinary party assembly was turned into a competition to gain seats and the disregarding of my call to draw a serious road map, not learning from the mistakes made in the presidential elections [on Aug. 10]."

She further blamed the CHP's administration for their "wrong and weak policies," which she claims are not representative of the people's sentiments and were not made with the winning of elections in mind.

Following Tarhan's resignation Eskişehir Deputy, Süheyl Batum, asserted that there are 20 more deputies within the CHP who stand against the current policies of the party. Batum said that these dissident members should gather and discuss the wrongheaded policies of the party administration.

Expressing support for Tarhan's resignation Batum said "I absolutely agree with Tarhan's statement. I talked with some [members to find a way out of the party's wrong policies] and I will talk with some later and if they do not intend to take action, I will not be a part of this game. I do not think that it is necessary to wait until the 2015 [national elections],"

Upon these developments, CHP referred Batum to the disciplinary committee with a demand for his dismissal. The political turmoil within the party was later fueled by Yalova Deputy Muhammer İnce's reaction to the demand to expel Batum from the party, which is currently being assessed by the committee.

İnce ran for the CHP chairmanship in the extraordinary congress and lost to current leader Kemal Kılıçraoğlu.

İnce said last Thursday that he found the CHP executive council's decision "exaggerated." He criticized the CHP's approach by saying the party could have first verbally warned Batum before referring him to the disciplinary committee.

Güler, made clear to the party administration on Thursday that she believes the party is at risk ahead of the general elections, and should urgently change. She also noted that MYK's decision to refer Batum to diciplinary committee was a violation of the party bylaws.