Peace expert: Turkey’s reconciliation process will be an inspiration and a model 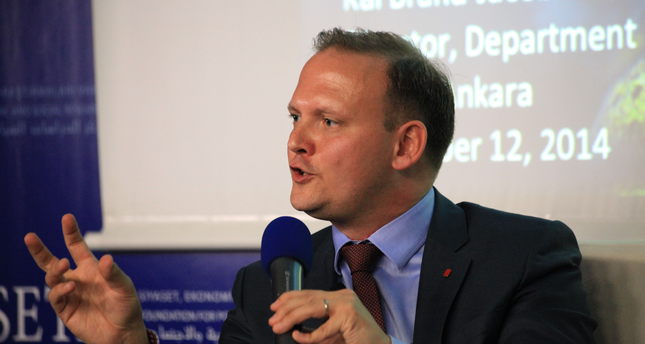 by Merve Aydoğan Nov 13, 2014 12:00 am
Kai Frithjof Brand-Jacobsen, an international expert in mediation and peace processes and the director of the Department of Peace Operations, gave a speech titled "The Role of Turkey in Dealing with Global and Systemic Challenges" at the Ankara-based think tank Foundation for Political, Economic and Social Research (SETA) with contributions from Hacettepe University Social Studies Department.

Following the panel, Brand-Jacobsen spoke to Daily Sabah to analyze the current challenges that Turkey is facing within the region.

He commented on Turkey's role in Syria, as well as Turkey's approach to the reconciliation process. Ankara has continuously emphasized that, in order to ensure peace and stability in the region, Bashar Assad's regime in Syria should be overthrown and there should be a no-fly zone and a safe zone imposed along the Syria-Turkey border.

He said, "I think the nature of the war and how the situation in Syria has degraded over the last three years, to the point where we are seeing millions of Syrians displaced within the country and within the region, and also seeing increased violence, is causing not only Turkey but also other actors to reassess our approach to the conflict."

He also said, "It is imperative upon Assad himself, but also for the good of his country, to step down while working to guarantee that his own constituencies' needs are met."

Addressing the Kurdish reconciliation process in Turkey, he said, "There have been a lot of processes geared towards changing the engagement of each of the parties, in relation to the use of violence in the conflicts, which is dramatically reduced, and in relation to addressing the needs and concerns of the parties involved. I think we have seen some impressive leadership from the key individuals on both sides."

Although many consider the reconciliation process to be lagging due to the recent riots in southeastern Turkey, Brand-Jacobsen said that, "there is a perception that the process might be in a flux or uncertainty, but this is not unusual in peace processes."

He also added, "There will be challenges and difficulties in peace processes, but if the leaders on both sides remain committed and develop a sound process, then I believe we are in a moment of greater hope for the resolution of this conflict."

Brand-Jacobsen finalized his comments by saying "it is important to take concrete steps to address the issues of concerns for both parties, and in the transformation of a deep-seeded conflict there does need to be leadership by different sectors to evolve a vision beyond for future relations. I also think that the Kurdish-Turkish leadership in taking steps to solving the conflict which will also present an example and a model for people around the world. A successful resolution in Turkey can help to open positive future dynamics and opportunities within Turkey. Turkey will also serve as an inspiration and a model internationally with a successful reconciliation process."

In his speech at the panel, Brand-Jacobsen emphasized the complexity of the crisis and systemic challenges in the region, and some possible resolutions which he has studied through his experiences as an advisor to various governments and international and national agencies including the Commonwealth Secretariat and the Organization for Security and Cooperation in Europe (OSCE).

Brand-Jacobsen said, "We are currently facing systematic challenges in aiding people in need on a global scale."

He continued his speech by explaining the aspects of the crises that countries are facing worldwide.

"The resolution to economic, political, social, environmental issues must be multi-faceted, multi-dimensional solutions as there is more than one actor [or] stakeholder involved," Brand-Jacobsen added.