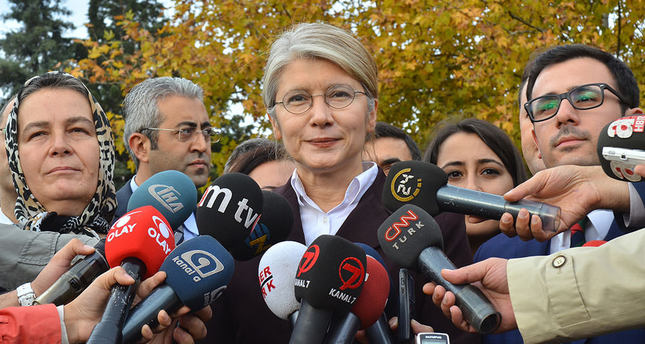 by Daily Sabah Nov 14, 2014 12:00 am
The dispute within Turkey's main opposition Republican People's Party (CHP) that flared up after the resignation of renowned party dissident Emine Ülker Tarhan does not appear to have settled down. On Friday, Tarhan, applied to the Interior Ministry to form a new political party after her resignation in late October in a move to prove the new party allegations. It was reported that the party she is about to form is called the Anatolia Party with a logo featuring a sunflower.

In the press statement she issued after her resignation, Tarhan blamed the CHP's administration for their "wrong and weak policies" that she claimed are not representative of the people's sentiments and were not made with winning elections in mind.

The former center-right Motherland Party (ANAVATAN) member, Yunus Yunusoğlu, who will reportedly take charge of party organization in the Anatolia Party, said that they do not aim to split the CHP.

In the Auust 10 presidential election, Tarhan's name was allegedly among those who would be mentioned for the presidential candidacy, but the claims were dismissed by both her and the CHP.

Following the CHP's loss in the presidential election, the 18th extraordinary party congress was held to elect a party leader in response to harsh criticism and intra-party opposition within the CHP. It was also asserted that Tarhan would announce her candidacy for party leadership to compete with current chairman, Kemal Kılıçdaroğlu, but these allegations were dismissed when CHP Vice Chairman Muharrem İnce announced his candidacy to run in opposition first.

Following Tarhan's resignation, more CHP members have called for the resignation of Kılıçdaroğlu. Most recently, İzmir Deputy Birgül Ayman Güler requested Kılıçdaroğlu and his team resign due to their poor administration skills, and Enver Aysever, a producer, author and former CHP member, harshly criticized the CHP for imitating the Justice and Development Party (AK Party), which has previously been criticized by political analysts.

"I call upon the party administration and Kemal Kılıçdaroğlu to resign before the 2015 general elections for the sake of the CHP's success," Güler said while speaking at a two-day event organized by the CHP in Germany.

Tarhan's resignation also triggered other dissidents within the party, including Eskişehir Deputy Süheyl Batum. Last week, Batum asserted that there are 20 CHP deputies who stand against the current policies of the party. Batum said that these dissident members should gather and discuss the wrongheaded policies of the party administration.

"If I see that there is no possibility to gather [dissident members] together, I will do what is necessary. … I absolutely agree with Tarhan's statement," Batum said, implying that he may resign if he thinks that there is no hope in continuing with the CHP.