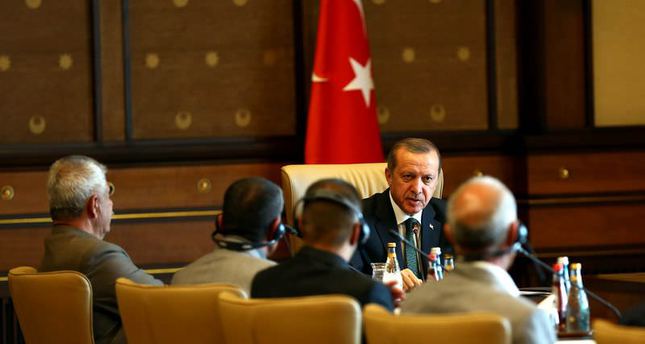 by daily sabah
Nov 14, 2014 12:00 am
President Recep Tayyip Erdoğan on Friday met at the Presidential Palace in Ankara with a committee of Yazidis who fled the violence of the Islamic State of Iraq and al-Sham (ISIS) in Iraq and are living in Turkey. The closed door meeting lasted one hour. Iraq's Yazidi religious minority from the town of Sinjar near Mosul fled to Turkey in August to escape ISIS attacks. Sinjar is the traditional home of some Yazidi communities, who follow Yazidism – a religion that fuses Zoroastrian, Manichaean, Jewish, Nestorian Christian and Islamic elements. Following the meeting, the president said that Turkey is doing its share to relieve the pains of the oppressed in the region with no ethnic, religious or sectarian discrimination.

Expressing his pleasure to host Yazidis from Iraq for the first time, Erdoğan said that he compared notes with the Yazidi group over the critical process that the region is experiencing. "Turkey stays hand in hand with those who are oppressed, not only in Iraq and Syria, but also in other countries around the world," he said, highlighting that Turkey extends its helping hand to those who are in need.

Emphasizing that Turkey has an open door policy for those who flee their countries, the president said that Ankara has followed a principled, compassionate and humanitarian policy since the outbreak of the crisis in the region.

Turkey was the main country that opened its doors to Yazidis fleeing from a potential massacre by ISIS militants – approximately 10,000 Yazidis crossed the border into Turkey. While many of them were accommodated in Turkish Yazidi villages, others who have no relatives in Turkey were placed in a refugee camp.

Yazidis, who are a Kurdish ethno-religious minority, which stretches across into Northern Iraq, hit the headlines after being targeted by ISIS extremists. Thousands of Yazidis have fled their homes and villages, with many being stranded on the Sinjar Mountains in Northern Iraq without food and water. Since June, ISIS has reportedly killed hundreds of Yazidis in Iraq and, according to Iraq's human rights minister, Mohammed Shia al-Sudani, have buried some alive, including women and children.