Turkey, US agree to support FSA to finish off Assad, ISIS 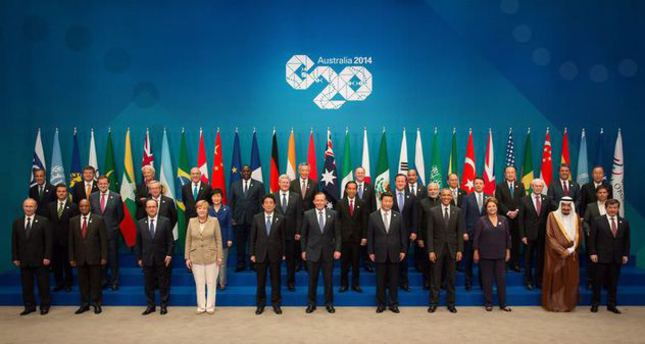 The divergence between Turkey and the U.S. on how to tackle the Syria crisis is getting narrower, PM Davutoğlu told editors-in-chief accompanying him in Australia, adding that both countries would help FSA topple Assad and rid Iraq and Syria of ISIS

With the help of Turkey and the U.S., the Free Syrian Army (FSA) will be able to clear the self-proclaimed Islamic State of Iraq and al-Sham (ISIS) from Syria and Iraq and topple the Assad regime, which is continuing to commit massacres since the civil war began in 2011.

On the sidelines of the ninth meeting of the 2014 G20 summit in Australia's eastern coastal city of Brisbane, leaders discussed recent developments in Syria and Iraq in view of the threat from the militant group ISIS and the continued danger posed by the Assad regime. Prime Minister Ahmet Davutoğlu discussed the crisis in Syria and Iraq with U.S. President Barack Obama on Saturday and shared the latest diplomatic developments with editors-in-chief, who were accompanying him during the Australia visit. In his Friday remarks in Brisbane, Davutoğlu welcomed media reports that Obama was asking his advisers to review their Syria strategy. As both leaders discussed recent developments in Syria and Iraq, Obama and Davutoğlu agreed that ISIS could not be defeated unless Syrian President Bashar Assad was toppled.

The Turkish prime minister stressed that Turkey has long argued that an integrated strategy was needed to solve the Syrian crisis rather than a "point and select strategy" like the airstrikes being conducted by the U.S.-led coalition in the Syrian town of Kobani, and throughout Syria and Iraq.

The U.S.-led international coalition, which includes France, Germany and Saudi Arabia, has been pounding ISIS targets in Iraq and Syria. During the G20 summit, Turkey announced that the country pledged $6 million to aid the battle against the current Ebola outbreak in West Africa; the World Health Organization (WHO) announced on Friday that 5,177 people had so far died of the deadly disease in eight countries since late December 2013.

Davutoğlu also thanked Obama for his speech in Myanmar on Thursday where he called on the country's leaders to scrap a controversial plan that aims to force the minority Rohingya Muslims to identify as Bengalis – a term favored by the government because it implies the group are illegal immigrants from Bangladesh.

The Myanmar government's Rakhine State Action Plan offers the chance of citizenship to roughly 1 million Rohingya Muslims – one of the most persecuted minorities in the world according to the United Nations. But they will only be eligible if they identify themselves as "Bengali," despite evidence they have lived in Myanmar for generations.

On Friday, Davutoğlu criticized the U.N. Security Council's structure, terming it as an exclusivist structure. Addressing the G20 summit, Davutoğlu said: "What we need today in the international system is inclusivity in every aspect. Without inclusivity there will be no legitimacy. The problem of the U.N. today is while the U.N. General Assembly is inclusive, the U.N. Security Council is exclusivist in the sense of the special status of certain nations."

He stressed that the G20 agenda should in turn represent a global agenda and not just that of 20 countries. He also talked about Turkey's G20 presidency and said Turkey would be the voice of everyone during this term. Turkey is set to take over the 2015 term-presidency of the G20 group on Dec. 1 following a meeting of the G20 heads of government on Nov. 15 and 16.

"During our presidency, we want to be the voice of everybody and to set the agenda so that if possible, we can bring low-income countries and G20 countries together to understand each other," he said.