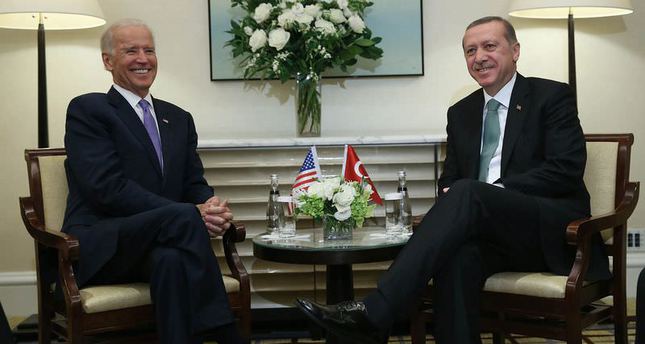 Turkey is determined to push for a comprehensive Syria strategy that includes the removal of Assad and defeat of ISIS as U.S. VP Biden is set to arrive in Turkey with an unchanged U.S. policy that has failed to end the bloodshed

U.S. Vice President Joe Biden will visit Turkey tomorrow, but Turkish leaders who are predicting a comprehensive change of policy from the administration of U.S. President Barack Obama to be more in line with Turkey's stance on Syria, might have misplaced hopes. Since CNN's much discussed story two weeks ago on a formal review of the U.S.'s strategy for the fight against the Islamic State of Iraq and al-Sham (ISIS) that may result in the inclusion of a possible no-fly zone or even a safe zone in Syria for refugees, Turkish officials have been hoping that Obama had finally understood the crucial importance Ankara has put on the removal of Syrian President Bashar Assad. Turkish officials have described Assad as the disease while ISIS, which has wreaked havoc in Iraq and Syria, is just a symptom.

However, the Obama administration has rebuffed such a description, opting to inform the Assad regime of its entering Syrian airspace for its anti-ISIS air missions prior to strikes, at once saying the Assad regime has forfeited legitimacy yet treating it as a sovereign state.

Although CNN's story was based on quotes by senior administration officials, Deputy National Security Adviser Ben Rhodes quickly refuted the reported claims and said that there was no formal review of the anti-ISIS strategy. While for a time the Obama administration seemed divided in its set of priorities concerning Syria, it took an unequivocal statement by Obama to put the speculation to rest. When a reporter asked him during a G20 press conference in Brisbane, Australia whether the U.S. was actively discussing ways to remove Assad as a part of a political transition in Syria, Obama simply said "no." Commenting on Biden's visit to Turkey, senior Obama administration officials also dismissed the possibility of a safe or no-fly zone in Syria. "We continue to have conversations with Turkey about how best to bolster security in the region, including along the Turkey-Syria border to take the fight to ISIS. But at the moment, we're not considering a no-fly zone or a buffer-zone," one unnamed official said.

Şaban Kardaş, president of the Center for Middle Eastern Strategic Studies (ORSAM), said that the U.S. is unable to make substantial gains with the current policy it is pursuing on Syria and is on the edge of reviewing its own policy independently of Ankara's demands.

Kardaş, noting that the U.S policy is mostly based on struggling with the ISIS threat in Syria rather than removing Assad from power, said that the U.S. is coming to realize that no achievement has been reached so far in the fight against ISIS with its current policies. Kardaş also added that the U.S. has also realized they are "indirectly" strengthening the Syrian regime.

"There is a possibility that Turkey and the U.S. will reach an agreement in the talks held between Biden and Ankara," Kardaş said, but unless the U.S. leans toward fighting Assad along with ISIS, Turkey will be reluctant to step up its support in the coalition.

Can Acun, a Middle Eastern politics researcher at the SETA Foundation, voiced similar pessimism for the talks between Biden and Ankara set to take place on Friday. Apart from the U.S. adopting policy that also covers fighting the Assad regime, he sees little possibility that the talks will results in an agreement.

Acun also added that the failure of the U.S. strategy in Syria derives from the fact that Obama is stuck in limbo between pursuing the right policy on ISIS to achieve tangible results and abiding by promises made to the public.

"Obama finally understood that a ground operation is necessary to support the fighting, but he is growing inconsistent as he is in a dilemma over what step to take next. He must keep in mind the promise he made to public that no U.S. soldier will be sent to fight in Syria," Acun said.

He further added that he has little belief that Biden will be likely to entertain Turkey's demands, and will rather only propose medium-term promises, as Acun asserted that the U.S. still needs support from Turkey.

While Biden is in Istanbul he will give a speech at the Atlantic Council's Economy and Energy Summit, meet with nongovernmental organization leaders and Patriarch Bartholomew.

Stephen Larrabee from the influential Rand Corporation said that the purpose of Biden's visit was to consult with high-level Turkish officials and try to ease recent strains in U.S.-Turkish relations caused by the differences in policy on Syria and Iraq. Some analysts previously suggested that Biden included Turkey in his trip to smooth relations with President Recep Tayyip Erdoğan. Biden's remarks at a Harvard University speech where he blamed Turkey for the rise of ISIS had sparked a furious response from Erdoğan, who demanded an apology. Reports said Biden afterward had called Erdoğan to apologize, which was confirmed by the White House, but the vice president later rejected the claim.

"The flap about Biden's apology is not the reason for the visit. Biden has responsibility for and long involvement in Iraq policy at the White House. So it is natural that he would be sent to try to ease the tensions in U.S.-Turkish relations over policy toward ISIS and Syria," Larrabee said.

Michael Werz, a senior fellow at the Center for American Progress, which is well-known for its close ties to Obama administration, agreed that Biden is traveling to Turkey to push for greater support for U.S. policy in the region. "It will be Turkey's task to re-redefine a constructive role in this dynamic environment."

Still, a senior Obama administration official argued that bilateral discussions with Turkish officials were continuing and no issue or suggestion was off the table. "But what I said before stands, which is we've had repeated conversations at all levels on the no-fly zone and buffer zone concepts. As the concept gets refined, I imagine those conversations will continue."

Biden will arrive in Istanbul on November 21 and will have a working dinner with Prime Minister Ahmet Davutoğlu and a working lunch is scheduled between Biden and Erdoğan for the next day. The meeting at the Beylerbeyi Palace will also probably be attended by Assistant Secretary of State Victoria Nuland, who will be accompanying Biden during the visit.