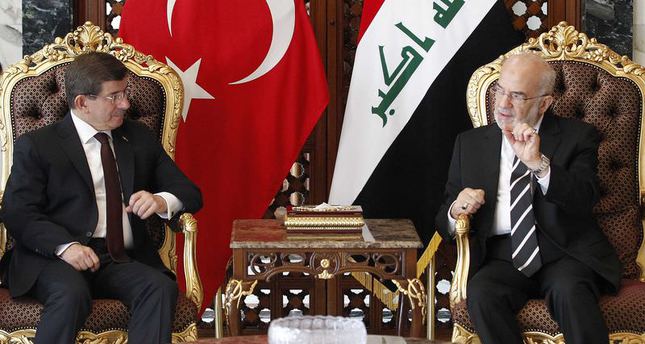 by Compiled from Wire Services
Nov 20, 2014 12:00 am
Turkish Prime Minister Ahmet Davutoğlu arrived in Baghdad on Thursday for talks with Iraqi leaders in a sign of warming relations between the two countries.

The Turkish government was on poor terms with al-Abadi's predecessor Nuri al-Maliki, who was widely criticized for policies that alienated Iraq's Sunni minority and helped lead to the rise of the terrorist group the self-proclaimed Islamic State of Iraq and al-Sham (ISIS).

The visit will be the first by a Turkish prime minister to Iraq in almost four years. Relations have been sour in the last few years over political differences. Baghdad's anger was visible over energy cooperation between Ankara and the KRG in northern Iraq.

Al-Abadi's inauguration in September and a growing consensus that ISIS militants pose a regional threat have also seen Iraq's relations with its Sunni Arab neighbours improve.

Evidence of that rapprochement came last week as Massoum visited Saudi Arabia, where he was received by King Abdullah.

With a new government in Baghdad, Iraq is reaching out to neighboring countries while fighting within an international coalition against the ISIS. Turkey is part of the coalition and has allowed Iraqi Kurdish forces to cross the border into Syria to help fight against the group.

Turkey has developed energy cooperation with the Kurdish Regional Government in northern Iraq in the past few years. This mutual relationship could see the Iraqi Kurdish region exporting significant amounts of natural gas to Turkey in the next few years.

The region started exporting crude oil independently through pipelines to Turkey where supplies are then shipped to world markets from the Turkish port of Ceyhan. Earlier this month, Iraqi Kurdish authorities said the region increased its exports to world markets through Turkey to 300 thousand barrels per day.

While relations have been strengthening between the KRG and Ankara, the region reached an agreement with Baghdad last week whereby it exports 150 thousand barrels per day of Kurdish crude oil through Turkey for the benefit of the central government. In return, Baghdad agreed to transfer $500 million to the region as part of its share in the federal budget. Both sides also agreed to continue negotiations to reach a final settlement to their long-standing oil dispute.

Iraq needs to boost oil exports to offset part of the impact of falling crude oil prices. The country has not been able to export crude through the northern oil pipeline running from the city of Kirkuk to Turkey's Ceyhan since ISIS took control over large swathes of the country.

Iraq's oil minister said that using the Kurdish pipelines would be a good alternative for the whole country.

Turkey has welcomed the agreement between Baghdad and the KRG and the Turkish oil minister said it was a guarantee of stability for the two governments.