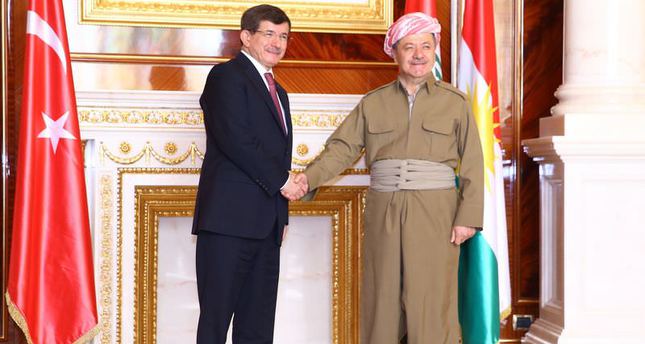 by daily sabah
Nov 21, 2014 12:00 am
Turkey's Prime Minister Ahmet Davutoğlu held a joint press conference with Massoud Barzani, President of the Iraqi Kurdistan Region in the Iraqi city of Irbil on Friday and stated Iraq's security is essential for Turkey, while noting the Kurdish region's security is also important.

Davutoğlu underscored that one of the most important issues in Iraq is security and stated the security of Turkey's neighbour is of vital importance. He noted that the two leaders discussed which steps need to be taken to tackle the security issue and establish stability in the country. In response to a question about the security of the Kurdish region, Davutoğlu stated that Turkey will take all measures to support security here as it is a historical and strategic issue.

With regards to the issue of peshmerga fighters, Ahmet Davutoğlu stated that Turkey's permission for the passage of peshmerga troops to Kobani is a concrete proof about the confidence between the two sides. "We will continue to take necessary precautions and discuss the issue of security" said Davutoğlu, who expressed it is only natural for the two sides to act in a collaborative manner.

Davutoğlu also expressed that Hakan Fidan's, -the undersecretary of Turkey's National Intelligence Organization- existence in the trip was normal as the issue of security is always accompanied by intelligence. "Fidan has carried out a number of meetings with his counterparts in Baghdad and Irbil and informed us about the situation" the prime minister said.

"8 billion dollars of the 12 billion dollars trade relations in Iraq are done with KRG, highlighting our intense relationship" said Davutoğlu, who expressed there are thousands of Turkish businessmen in Iraq and Turkey's economic ties with the KRG are growing everyday.

Davutoğlu is accompanied by Interior Minister Efkan Ala, Culture and Tourism Minister Ömer Çelik, Customs and Trade Minister Nurettin Canikli and the Justice and Development Party's Deputy Chairman Yasin Aktay during his two-day visit to Iraq.