Turkey to be the center of health in the whole region, says Minister of Health 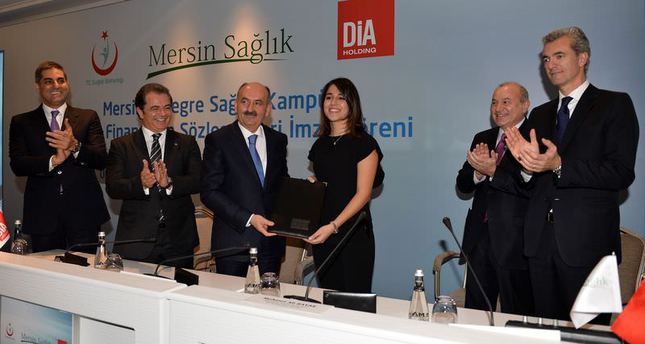 Turkey’s first finance agreement under the PPP model was signed on Nov. 21 for the construction of an integrated health campus project in the southern province of Mersin

Turkey's ambitious projects in the health sector in recent years, particularly under its Public Private Partnership (PPP) initiative, will make the country a health center in the region, said the minister of health, Mehmet Müezzinoğlu. He made the comments during the signing ceremony of the credit facility agreement to finance the Mersin Integrated Health Campus on Nov. 21.

Müezzinoğlu said that Turkey will be a pioneer in terms of its hi-tech, environment-friendly hospitals and will increase total bed capacity by 90,000 to 95,000 by the year 2023. This will bring annual revenue of $20 billion to $25 billion from neighboring countries as far as a 3-hour-long flight away by 2023, he said.

He further explained, "We do not want to be a country consuming health care, but instead aim to contribute to health-related sciences and providing medicine."

The Ministry of Health has, accordingly, introduced the build-lease transfer model of the PPP to raise the standards of healthcare facilities in the country. Under this model, massive integrated health campuses are being built all around Turkey by the private sector, which will then be leased to the Ministry of Health under certain annual fees, one of which is the Mersin Integrated Health Campus.

The Mersin Integrated Health Campus's finance agreement was signed on Nov. 21– the first agreement ever to be signed under the PPP model in Turkey – with the participation of Müezzinoğlu, two of the board of directors of the construction firm DIA Holding, Murat Çeçen and Hassan Gozal, and representatives from three lending institutions – DenizBank, Yapı Kredi, UniCredit Bank Austria AG.

The agreement made it possible for DIA Holding Company to secure 272 million euros with 15-years maturity financing from the three lending institutions. The construction of the Mersin Integrated Hospital is expected to be finished within 24 months or even earlier, according to the construction company. The health campus will cover 355,420-square-meters of land and will have a 1,259 bed capacity.

The creditor DenizBank's CEO Hakan Ateş considered such health investments in Turkey as the country's "oil," since it is through this that the country will be able to finance the current account deficit through attracting health tourists from abroad. He said at the ceremony, "Last year, a total of 300,000 foreign nationals visited Turkey for health tourism, leaving $2.5 billion in the country, and we hope to increase this amount with the ongoing and future investments in the sector."

Another lending institution, UniCredit Bank's representative, Carlo Vivaldi, said that the day is a "special" one for Turkey. Describing the Mersin Integrated Hospital project as a "new baby," he said: "This is the first project whose finance agreement has been signed out of a total of 30 health campus projects in Turkey." Vivaldi added that the PPP model is not only a model important for the healthcare system, but also for schools, universities, prisons, and most importantly, the railway sector, emphasizing that the sectors other than health should soon benefit from the model's advantages.