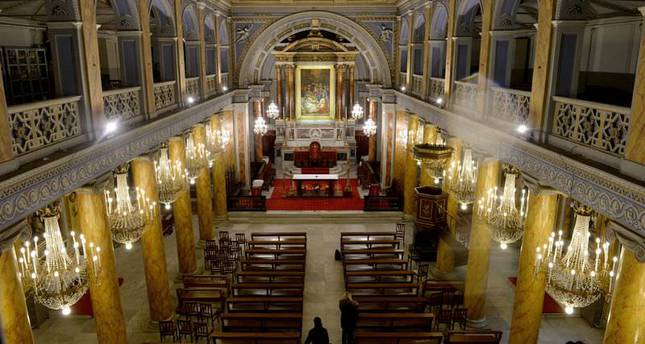 "Although the media has said that the Pope will visit the Virgin Mary's House in Izmir, it will not happen. Pope Francis will only visit Ankara and Istanbul, Pelatre said.

The House of the Virgin Mary in Selçuk, located in the western province of Izmir, has been visited by three previous popes – Pope Paul VI in 1967, Pope John Paul II in 1976 and Pope Benedict XVI in 2006.

Francis will be the fourth pope to visit Turkey; the last to come was Benedict in 2006.

The Pope's visit will help improve the dialogue between Turkey and the Vatican, Pelatre said. "Pope Francis chose to land in Ankara first, which means he wishes to strengthen the relations between the two states," Pelatre added.

During his three-day visit, the spiritual leader of the world's more than 1 billion Catholics will meet President Recep Tayyip Erdoğan and the head of Turkey's Religious Affairs Directorate, Mehmet Görmez.

The Supreme Pontiff will hold a Holy Mass at the Catholic Cathedral of the Holy Spirit in Istanbul and privately meet Istanbul-based Greek Patriarch Bartholomew I, spiritual leader of the world's Eastern Orthodox churches.

He is also expected to visit the mausoleum of Turkey's founder, Mustafa Kemal Atatürk, in Ankara, and to visit the Hagia Sofia museum and the Sultan Ahmet (Blue) Mosque in Istanbul.

His visit will come three days after he addresses the European Parliament in Strasbourg.

The Pope's visit comes at a difficult time for people of various religions in the Middle East and when Turkey is hosting more than 1.5 million Syrian refugees.

Syria's civil war has left more than 191,000 people dead since it began three years-and-a-half ago according to a U.N. report released in August.

Iraqi Christians have also fled their homes in fear of their lives during the invasion by the self-proclaimed Islamic State of Iraq and al-Sham (ISIS) militants; many of them have since migrated to Turkey and other countries.