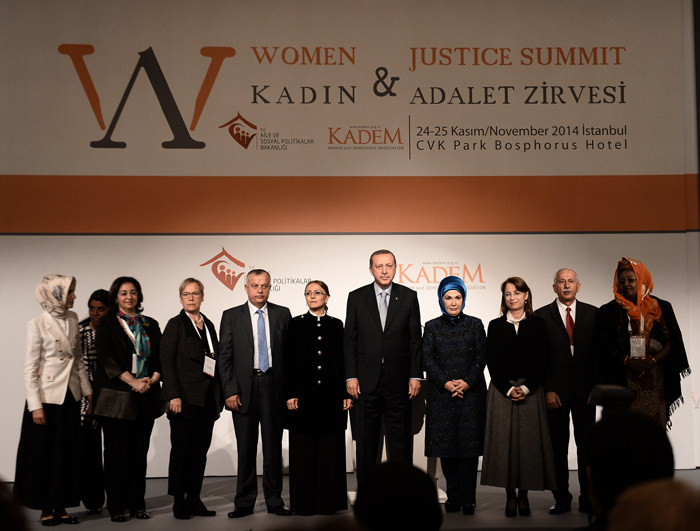 Turkish President Recep Tayyip Erdoğan addressed the First International Women and Justice Summit held in Istanbul yesterday. He praised Islam's approach to women and highlighted the need for justice to resolve women's problems rather than calls for equality by feminist activists that burden women.

Erdoğan made his remarks at the two-day event sponsored by Daily Sabah. The summit was organized by the leading nongovernmental organization (NGO) Women and Democracy Association (KADEM) and the Family and Social Policies Ministry. It brought together politicians, activists, academics and dignitaries from around Turkey and abroad.

The president said the gender gap between men and women can only be eliminated through justice. "Today, some people call for equality of men and women. Equality is possible within each gender, such as equality of women with other women and men with other men. What is really needed is women's equality before justice and that is what we should be committed to. Women need to be equivalents, rather than being equals," he said. "It is against nature to make women and men equals. For instance, a pregnant woman is not equal to a man in a workplace. She cannot be burdened with the responsibilities of men. You cannot make women – like the Communist regimes did – work in hard labor, as in giving her a shovel. It is against her delicate nature," he said. Erdoğan stated Turkey witnessed the same problem in the past, referring to women laborers. "Those poor women suffered greatly while men idled at coffeehouses, burdening women with all the manual labor," he said, referring to a prevalent culture in rural Turkey. "So, what we need is not the equality of women with men but justice," Erdoğan said.

Erdoğan also praised women's place in Islam in his speech. "In Islam, mothers are described as 'having the paradise at their feet.' I used to kiss my dear mother's feet; I would smell heaven. Motherhood is an entirely different thing. It is unattainable; it is sacred. Not everyone would understand what it really is. Feminists cannot understand it; they take motherhood lightly," he said.

Speaking about murders of women by their spouses, which have reached concerning levels in Turkey according to some nongovernmental organizations, Erdoğan said such actions were the result of people "lacking faith." "A religious person cannot be involved in any act of violence against women. Islam means peace. If you belong to a religion of peace, you cannot treat women in any brutal way. You cannot commit acts of violence," he said, and emphasized that Islam forbade violence toward women.

Erdoğan said the ruling Justice and Development Party (AK Party) government he used to serve as prime minister in the past has always been on the side of women in their struggle for their rights and pledged to continue support for women's rights.

He also praised KADEM which has "accomplished a lot in less than two years since its formation." "With its stance, discourse and ideas, it stands out among other nongovernmental organizations. Unlike other NGOs, it presented a concrete agenda rather than looking to fuel tensions like some other activist groups. Turkey had really needed such an organization for women's problems. I believe this summit will be very important for discussing women's problems and justice together on a national and international level," Erdoğan said, adding that Turkey needed a new approach to women's rights rather than to be confined by the rhetoric for women's rights in other countries. "Turkey can present a different point of view by introducing conscience, sincerity and justice into this matter. You can build a new form of struggle instead of 'exported' efforts," he said, noting that women's rights activists were "stuck on the concept of equality while missing the justice aspect of the matter. For instance, it is important to raise global awareness to the inhumane treatment of Palestinian, Egyptian, Syrian and Iraqi women."

Addressing the summit, Family and Social Policies Minister Ayşenur İslam said the process regarding the struggle for women's rights reached a point that further widened the gender gap and pitted genders against each other in a modern-day challenge. "If women's problems are still debated after it first began some 100 years ago, then we need a new debate on the current approach to the problems," İslam said, and added that women and men should be "complementary" to each other rather than substitutions for each other and that movements for women's rights that ignores a society's basic dynamics would fail. "We inherited a legacy of justice that sided with the weak against the strong and we need to rebuild the notion of courage in pursuit of justice," she said, and emphasized that Turkey took measures for women's active inclusion in social life in the past decade.

İslam also spoke about violence against women that is being discussed at the summit. She said elimination of violence was only possible by a joint and determined stance by all members of the society and stressed the national action plan that the government implemented in 2012.

Speaking at the event, KADEM President Sare Aydın Yılmaz said the summit is hosting participants of different cultures and faiths who are discussing women's status, progress and struggle against violence targeting women. She said that the progress of women was condition of the social justice, adding, "This is about building a democratic, fair and advanced society." Yılmaz said societies managing to address women's problems efficiently would succeed in maintaining justice, development and prosperity. Yılmaz said women and men complimented each other as the state of their togetherness was based on spiritual values and culture. "First, we need to maintain solidarity between women and men for the advancement of the society. Unfortunately, it is difficult for women to be rescued from patriarchal views that see itself as the pillar of the system," Yılmaz said. She added that the real issue was social gender justice rather than equality between genders. "We believe justice will be served once the roles attributed to men and women are redefined," she said.

The Regional Director for Europe and Central Asia at U.N. Women, Ingibjorg Gisladottir, said at the event that NGOs had a very important role in the fight against gender inequality. She praised "serious steps" in terms of women's rights in Turkey, but noted that gender inequality was still prevalent in the region and in the world.

She said social ideologies discriminating against women were still prevalent in the region, especially in terms of equal pay and women's promotion in the business world.

The International Women and Justice Summit aims to start a debate to eliminate the gender-based discrimination and establish a just and democratic order for genders. The summit's organizers say it also aims to shape an effective and scientific platform for a comprehensive debate of challenges women face, from domestic violence to discrimination in politics, business and other areas of life.

The event's agenda addresses topics such as obstacles to the participation of women in decision-making and political life, the gender gap in wages, job distribution, female-specific poverty, problems of women displaced by conflicts and human trafficking, women's exploitation as objects of consumption in the media and combating violence against women and related social policies.