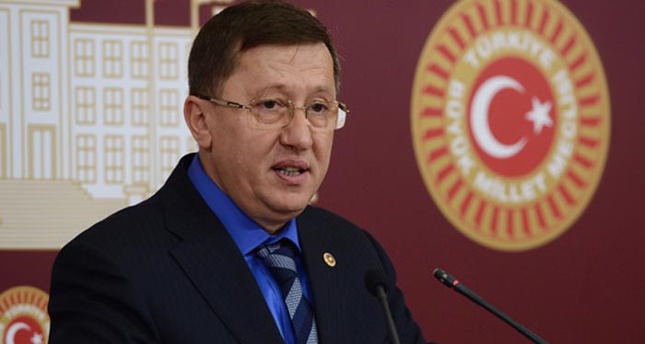 by daily sabah
Nov 25, 2014 12:00 am
A deputy from the Nationalist Movement Party (MHP) submitted a law proposal on Monday for Turkey to recognize Israel as a "terrorist state".

Lütfü Türkkan, MHP Deputy from the city of Kocaeli, made the proposal based on Israeli aggression in the Mavi Marmara incident, which took place in 2010 and resulted in the deaths of nine Turkish people by Israeli soldiers.

The proposal stated that thousands of Palestinians have been killed by "terrorist attacks" since the establishment of Israel in 1948.

"Israel has targeted civilians in its attacks against Palestine and a countless number of women and children have lost their lives" read the statement, which referred to the most recent attacks which started in July 7. It was estimated that Israeli air strikes and ground attacks against Gaza has killed 1,363 people and injured 7,680.

"The casualties and the number of injured increase with continuous attacks" the statement noted, which claimed that the crimes committed by Israel fit in with the description of terrorism as they indiscriminately kill children, the elderly, and all civilians.

Türkkan's proposal claimed that the recognition of Israel as a terrorist state by Turkey is an undeniable fact.

The destructive Israeli attacks on Gaza, which took place in July, lasted for 51 days and left the enclave in ruins. Schools, hospitals, mosques and shelters owned by the United Nations were shelled by Israel, while Israeli politicians called for killing all Palestinians. Ayelet Shaked, an Israeli member of the parliament has stigmatized all Palestinians as terrorists and called for the killing of Palestinian mothers "so they cannot bear any more terrorists."

Most recently, the Israeli cabinet has approved a bill which will officially describes Israel as "the national homeland of the Jewish people," institutionalizing discrimination against Palestinians.