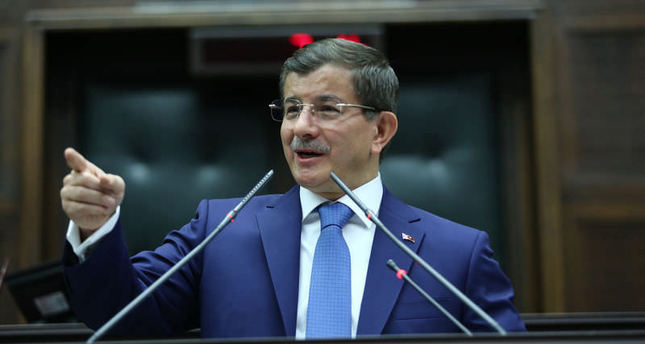 Prime Minister Davutoğlu harshly criticized nationalist party leaders for their stance toward the Alevi question stemming from the 1937 Dersim incidents, and dared other political parties to visit eastern Turkey to emphasize the government’s efforts to tackle the Alevi community’s problems

Prime Minister Ahmet Davutoğlu, in his weekly group meeting on Tuesday, reiterated the government's determination to end the long-continued Alevi question in Turkey with the steps taken as part of the Alevi initiative.

Recalling his visit to the eastern Turkish cities and districts of Patnos, Erzincan and Tunceli, Davutoğlu dared all political party leaders to visit these cities to show the importance of creating a bridge between nation and the state.

"We [the committee chaired by Davutoğlu] met our Sunni Kurdish brothers in Patnos, we met Sunni Alevi Turkmen brothers in Erzincan, we met Kurdish Alevi brothers in Tunceli. I am calling on those who urge them to turn against each other. I did not see anger in their eyes. They are our brothers and sisters," Davutoğlu said, vowing to tackle the Alevi issue to uphold the rights of the Alevi community.

The prime minister harshly criticized Devlet Bahçeli, the leader of the Nationalist Movement Party (MHP) for his insistence on defending the Dersim Massacre that took place in 1937 and 1938 in the Dersim region – now called Tunceli – where a military campaign was launched to suppress an Alevi uprising, which resulted in the deaths of over 13,000 people. Davutoğlu questioned Bahçeli's motives behind defending such assimilative and discriminative measures imposed by the former one-party rule in Turkey. "I dare Mr. Bahçeli to pronounce these remarks – calling those who participated in the Dersim uprising terrorists and traitors – in Tunceli," Davutoğlu said, adding that it is not fair to wholly declare a specific group of people as traitors. "All segments of society deserve respect," he said, and emphasized that no group is considered as a burden or source of trouble in the ideology of the new Turkey.

Davutoğlu underscored that his administration embraces all people regardless of their background and are welcomed throughout the country, whereas he noted that Bahçeli's radical remarks may not be welcomed by all. "True nationalism entails embracing every single citizen, Davutoğlu said, and continued by criticizing Bahçeli's 10-point suggestions to resolve the Alevi issue. Davutoğlu noted that the government has already fulfilled seven of the proposed suggestions and Bahçeli has not been following the developments properly.

He recalled his announcement in Tunceli on Sunday that, in line with Alevi demands, the old barracks in Dersim will be turned into a museum and be named the Dersim Museum. Tunceli University will also be renamed Munzur University, after the region's Munzur River. Returning the former names of Alevi regions is symbolically significant to the Alevi community. The renaming issue has unpleasant connotations for Alevis who evoke the pressure they have been under because of their ethnicity, language and/or beliefs.

Modern Turkey's longstanding Alevi turmoil erupted over the Dersim Massacre that took place in 1937 and 1938 in Tunceli. The incident was considered a Turkish military campaign against an Alevi uprising after Turkey's 1934 Resettlement Law, which aimed to assimilate ethnic minorities. According to gendarmerie reports, 13,806 people were killed and thousands more were internally displaced due to the conflict in the region.

On November 23, 2011, then Prime Minister Recep Tayyip Erdoğan apologized on behalf of the state for the 1937 Dersim Massacre. He also described the incidents as one of the most painful and bloody tragedies in modern Turkish history.

Since the Dersim Massacre, Alevi activists have demanded to be treated as a religious minority, including official recognition and tax exemption for their houses of worship (cemevi), elective subjects on the Alevi faith in public schools and greater emphasis on non-discrimination.

Davutoğlu noted that his visit to these eastern cities aims to impart a message regarding the October 6-7 Kobani protests that turned into clashes between pro- and anti-PKK groups and claimed dozens of lives, mostly in eastern Turkish cities.

Davutoğlu called on all party leaders to develop a more moral and respectful rhetoric when talking about each other and encouraged all leaders to avoid using offensive and degrading language. He said that he will not make any comments about the main opposition leader Kemal Kılıçdaroğlu's offensive remarks since Kılıçdaroğlu's mother-in-law recently passed away and it would be inconsiderate to get into an argument with him at the moment.

Announcing that Turkey will host a joint cabinet meeting with Iraq on December 24-25, Davutoğlu said that Iraq is a friend and important strategic partner of Turkey. He added that Syria will not be abandoned to terrorist organizations like ISIS or oppressive regimes like President Bashar Assad's.

Last week, the prime minister paid an official visit to Irbil and Baghdad upon the invitation of central Iraqi government Prime Minister Haidar al-Abadi and this visit is considered as a significant step to revive the soured relations between Iraq and Turkey.